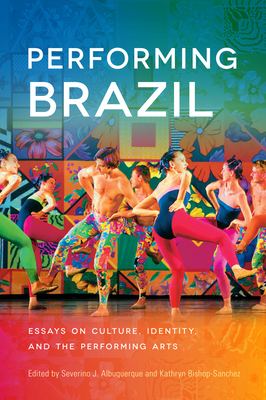 
Usually Ships in 1-5 Days
A field-shaping anthology by top cultural critics and practitioners representing a wide range of disciplines and art forms, Performing Brazil is the first book to bring together studies of the many and varied manifestations of Brazilian performance in and beyond their country of origin. Arguing that diverse forms of performance are best understood when presented in tandem, it offers new takes on better-known forms, such as carnival and capoeira, as well as those studied less often, including gender acts, curatorial practice, political protest, and the performance of Brazil in the United States.
The contributors to the volume are Maria José Somerlate Barbosa, Eric A. Galm, Annie McNeill Gibson, Ana Paula Höfling, Benjamin Legg, Bryan McCann, Simone Osthoff, Fernando de Sousa Rocha, Cristina F. Rosa, Alessandra Santos, and Lidia Santos.
Severino J. Albuquerque is a professor of Portuguese and Brazilian studies at the University of Wisconsin–Madison. His books include Violent Acts: A Study of Contemporary Latin American Theatre and Tentative Transgressions: Homosexuality, AIDS, and the Theater in Brazil. Kathryn Bishop-Sanchez is a professor of Portuguese and gender and women's studies at the University of Wisconsin–Madison. They are coeditors of the Luso-Brazilian Review.

"Home to the most extravagant carnival celebrations in the world, stunning visual cultures, exuberant dance traditions, and famously groovy music, Brazil has long been recognized for its performative vocation. This collection of essays offers fresh insights into well-known performance practices, while casting a spotlight on neglected phenomena. A model of multidisciplinary inquiry, Performing Brazil invites readers to consider the performative meanings of a broad range of actions, events, objects, sounds, stagings, and texts."—Christopher Dunn, Tulane University

“Performing Brazil bravely attends to the need for multi-disciplinary volumes as our humanistic and area-studies curricula continue to diversify in the new millennium. Contributors of varied provenance explore usefully an engaging array of roles and sites of investigation.”—Charles A. Perrone, University of Florida


“Makes a powerful case that performance itself, rather than a mere representation of a given culture, has been an underappreciated component of the larger processes of exchange, hybridization, and heterogeneous resistance among different cultures.”—Hispanic American Historical Review

“Highly recommended for anyone who researches Brazil due to its precise information, content, illustrations of dance groups, historical context, pictures of visual and performing arts, and literary examples.”—Hispania