The Wind that Swept Mexico: The History of the Mexican Revolution of 1910-1942 (Texas Pan American Series) (Paperback) 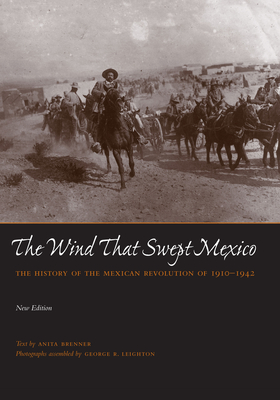 The Wind that Swept Mexico: The History of the Mexican Revolution of 1910-1942 (Texas Pan American Series) (Paperback)

The Mexican Revolution began in 1910 with the overthrow of dictator Porfirio Díaz. The Wind That Swept Mexico, originally published in 1943, was the first book to present a broad account of that revolution in its several different phases. In concise but moving words and in memorable photographs, this classic sweeps the reader along from the false peace and plenty of the Díaz era through the doomed administration of Madero, the chaotic years of Villa and Zapata, Carranza and Obregón, to the peaceful social revolution of Cárdenas and Mexico's entry into World War II.

The photographs were assembled from many sources by George R. Leighton with the assistance of Anita Brenner and others. Many of the prints were cleaned and rephotographed by the distinguished photographer Walker Evans.

Anita Brenner, author of Idols behind Altars and a number of children's books, was born in Mexico and lived there for many years. During the Spanish Civil War she wrote dispatches from Spain for the New York Times and the Nation and for many years she edited the magazine Mexico This Month.

. . . here is the history of the revolution in 184 of the best photographs of the time. The whole disintegration and painful reintegration of a society is marvellously set before the eyes . . .
— Times Literary Supplement

. . . a classic and sympathetic statement of the first of the great twentieth century revolutions--its words and pictures command our attention and our respect.
— Military History

Only 100 pages of text and 184 historical news photographs, yet this is the Mexican Revolution in its drama, its complexity, its incompleteness! One could not have seen it more closely and fully had one taken part in it . . .
— Bertram D. Wolfe