Faith, Nationalism, and the Future of Liberal Democracy (Hardcover) 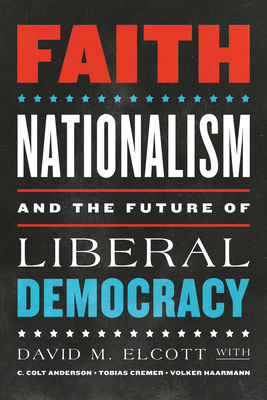 Faith, Nationalism, and the Future of Liberal Democracy (Hardcover)

Faith, Nationalism, and the Future of Liberal Democracy highlights the use of religious identity to fuel the rise of illiberal, nationalist, and populist democracy.

In Faith, Nationalism, and the Future of Liberal Democracy, David Elcott, C. Colt Anderson, Tobias Cremer, and Volker Haarmann present a pragmatic and modernist exploration of how religion engages in the public square. Elcott and his co-authors are concerned about the ways religious identity is being used to foster the exclusion of individuals and communities from citizenship, political representation, and a role in determining public policy. They examine the ways religious identity is weaponized to fuel populist revolts against a political, social, and economic order that values democracy in a global and strikingly diverse world. Included is a history and political analysis of religion, politics, and policies in Europe and the United States that foster this illiberal rebellion.

The authors explore what constitutes a constructive religious voice in the political arena, even in nurturing patriotism and democracy, and what undermines and threatens liberal democracies. To lay the groundwork for a religious response, the book offers chapters showing how Catholicism, Protestantism, and Judaism can nourish liberal democracy. The authors encourage people of faith to promote foundational support for the institutions and values of the democratic enterprise from within their own religious traditions and to stand against the hostility and cruelty that historically have resulted when religious zealotry and state power combine.

Faith, Nationalism, and the Future of Liberal Democracy is intended for readers who value democracy and are concerned about growing threats to it, and especially for people of faith and religious leaders, as well as for scholars of political science, religion, and democracy.

David Elcott is the Taub Professor of Practice in Public Service and Leadership at the Wagner School of Public Service at NYU and director of the Advocacy and Political Action specialization.C. Colt Anderson is the outgoing dean of the Graduate School of Religion and Religious Education at Fordham University.Tobias Cremer is a Junior Research Fellow at Pembroke College, Oxford, and a recent Ph.D. from Cambridge.Volker Haarmann is the chair of the Department of Theology of the Protestant Church in the Rhineland.