Head of the Mossad: In Pursuit of a Safe and Secure Israel (Hardcover) 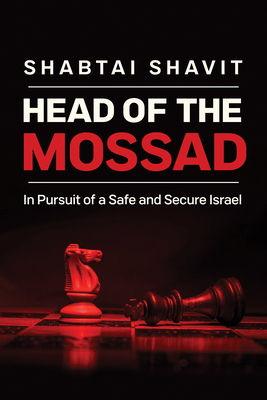 Head of the Mossad: In Pursuit of a Safe and Secure Israel (Hardcover)

Shabtai Shavit, director of the Mossad from 1989 to 1996, is one of the most influential leaders to shape the recent history of the State of Israel. In this exciting and engaging book, Shavit combines memoir with sober reflection to reveal what happened during the seven years he led what is widely recognized today as one of the most powerful and proficient intelligence agencies in the world. Shavit provides an inside account of his intelligence and geostrategic philosophy, the operations he directed, and anecdotes about his family, colleagues, and time spent in, among other places, the United States as a graduate student and at the CIA.

Shavit's tenure occurred during many crucial junctures in the history of the Middle East, including the collapse of the Soviet Union and the end of the Cold War era; the first Gulf War and Prime Minister Yitzhak Shamir's navigation of the state and the Israeli Defense Forces (IDF) during the conflict; the peace agreement with Jordan, in which the Mossad played a central role; and the assassination of Prime Minister Yitzhak Rabin. Shavit offers a broad sweep of the integral importance of intelligence in these historical settings and reflects on the role that intelligence can and should play in Israel's future against Islamist terrorism and Iran's eschatological vision.

Head of the Mossad is a compelling guide to the reach of and limits facing intelligence practitioners, government officials, and activists throughout Israel and the Middle East. This is an essential book for everyone who cares for Israel's security and future, and everyone who is interested in intelligence gathering and covert action.

Shabtai Shavit has over fifty years of experience in international security and counterterrorism and is an internationally recognized authority in the field. He served in the Mossad, Israel's prestigious intelligence agency, for thirty-two years, eventually rising to the position of director. Previously, he served in the IDF, the Israeli Defense Forces, retiring after a distinguished service in "Sayeret Matkal," Israel's elite special forces and SWAT unit.