On the Origins of Cognitive Science: The Mechanization of the Mind (Paperback) 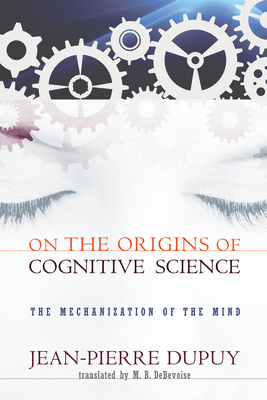 On the Origins of Cognitive Science: The Mechanization of the Mind (Paperback)

By Jean-Pierre Dupuy, M. B. Debevoise (Translated by)


Usually Ships in 1-5 Days
An examination of the fundamental role cybernetics played in the birth of cognitive science and the light this sheds on current controversies.

The conceptual history of cognitive science remains for the most part unwritten. In this groundbreaking book, Jean-Pierre Dupuy—one of the principal architects of cognitive science in France—provides an important chapter: the legacy of cybernetics. Contrary to popular belief, Dupuy argues, cybernetics represented not the anthropomorphization of the machine but the mechanization of the human. The founding fathers of cybernetics—some of the greatest minds of the twentieth century, including John von Neumann, Norbert Wiener, Warren McCulloch, and Walter Pitts—intended to construct a materialist and mechanistic science of mental behavior that would make it possible at last to resolve the ancient philosophical problem of mind and matter. The importance of cybernetics to cognitive science, Dupuy argues, lies not in its daring conception of the human mind in terms of the functioning of a machine but in the way the strengths and weaknesses of the cybernetics approach can illuminate controversies that rage today—between cognitivists and connectionists, eliminative materialists and Wittgensteinians, functionalists and anti-reductionists.

Philosopher Jean-Pierre Dupuy holds professorships at École Polytechnique, Paris, and Stanford University. At École Polytechnique he founded and directed the Applied Epistemological Research Center (CREA).
A healthy prescription for those engaged in advancing theories of cognition. It contrasts starkly with the superficiality of some self-styled gurus of cybernetics, who mire the word in cyberspace, cyborgs and the cyberculture.—Igor Aleksander, New Scientist—

By putting a magnifying glass on a crucial period in the intellectual history of the last century, Dupuy has opened up a field for further discussion and hopefully better understanding of where cognitive science stands and where it is going.