The World of Music According to Starker (Paperback) 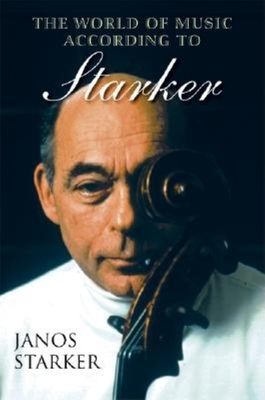 The World of Music According to Starker (Paperback)

"Few cello players currently before the public have enjoyed the kind of international success in all conceivable musical career roles as Janos Starker. In his lifetime, Starker has gained renown as teacher, soloist and orchestra player." --Chicago Tribune

"Starker . . .remains one of the wonders of the musical world, an artist who finds innumerable ways to shape and color lines." --Cleveland Plain Dealer

"Starker is not just a cellist. He is widely recognized as one of the finest of the last 50 years." --Indianapolis Star

"Starker emerges here as the rare artist who respects the past but lives enthusiastically in the present. . . Essential. All readers; all levels." --Choice

Janos Starker is universally acknowledged as one of the world's great musicians. Known for a flawless technique paired with expressive playing and interpretation, the Hungarian-born cellist is arguably also the premier teacher of his instrument in our time. String players flock to his masterclasses from all over the world, and cellists compete vigorously to study under him at the Indiana University School of Music. More than the consummate musician, however, Starker is also a raconteur and writer, occasionally quirky and droll, always witty and with a pointed opinion to share.

The World of Music According to Starker is a colorful autobiography spanning the author's fascinating life. From his early musical education during World War II in Hungary, to his world tours, educational philosophy, and recording and pedagogical legacy, Starker takes the reader on a riveting, entertaining, and informative journey. Included in the book are several of Starker's short stories and commentaries on world events, academia, and--of course--music that have appeared in newspapers, music periodicals, and trade magazines.

Also includes a bonus CD recording of Starker's last public recital, which is unavailable commercially and includes his only recording of the Strauss Sonata in F, Opus 6.

Janos Starker (1924-2013) was Distinguished Professor of Cello in the School of Music at Indiana University. He held five honorary doctorates, and was a former principal cellist with the Metropolitan Opera and the Chicago Symphony Orchestra. He made more than 100 commercial recordings and gave world premiere performances of countless recital works by important composers. Among his many awards and honors is the 1997 Grammy Award for Best Recording by a Soloist without Accompaniment for his recording of Bach's Six Suites for Solo Cello.