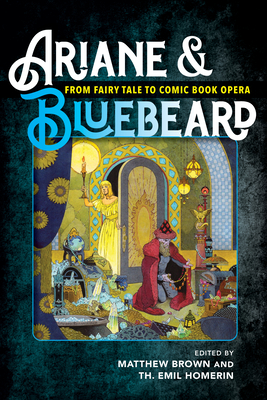 Maurice Maeterlinck described his libretto Ariane et Barbe-bleue as a sort of legendary opera, or fairy opera], in three acts. In 1907, Paul Dukas finished setting Maeterlinck's libretto to music, and the opera's Paris premiere was lauded as a landmark in operatic history.

Ariane & Bluebeard: From Fairy Tale to Comic Book Opera offers a comprehensive, interdisciplinary look at this historic opera, including its structure, reception, and cultural implications. This lively collection juxtaposes chapters from experts in music, literature, the visual arts, gender studies, and religion and philosophy with vibrant illustrations by comic artist P. Craig Russell and interviews with performers and artists.

Matthew Brown is Professor of Music Theory at the Eastman School of Music. He is author of numerous articles and five books, including Debussy Redux: The Impact of His Music on Popular Culture (IUP). In 2011, he founded TableTopOpera, a multimedia chamber ensemble based at the Eastman School of Music.Th. Emil Homerin was Professor of Religion and Former Chair of the Department of Religion and Classics at the University of Rochester. His works include a number of books and articles on Islam, Arabic literature, and mysticism. He is author (with Joy Calico and Matthew Brown) of Comic Book Opera: P. Craig Russell's Salome in a Production by Table Top Opera in The Opera Quarterly.