Air Castle of the South: WSM and the Making of Music City (Music in American Life) (Hardcover) 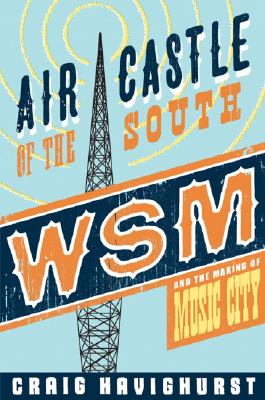 Air Castle of the South: WSM and the Making of Music City (Music in American Life) (Hardcover)

Started by the National Life and Accident Insurance Company in 1925, WSM became one of the most influential and exceptional radio stations in the history of broadcasting and country music. WSM gave Nashville the moniker “Music City USA” as well as a rich tradition of music, news, and broad-based entertainment. With the rise of country music broadcasting and recording between the 1920s and ‘50s, WSM, Nashville, and country music became inseparable, stemming from WSM’s launch of the Grand Ole Opry, popular daily shows like Noontime Neighbors, and early morning artist-driven shows such as Hank Williams on Mother’s Best Flour.

Sparked by public outcry following a proposal to pull country music and the Opry from WSM-AM in 2002, Craig Havighurst scoured new and existing sources to document the station’s profound effect on the character and self-image of Nashville. Introducing the reader to colorful artists and businessmen from the station’s history, including Owen Bradley, Minnie Pearl, Jim Denny, Edwin Craig, and Dinah Shore, the volume invites the reader to reflect on the status of Nashville, radio, and country music in American culture.

Writer and filmmaker Craig Havighurst has covered music for The Wall Street Journal, The Tennessean, WPLN-FM and NPR. He is also a founding producer of the weekly throwback Americana radio show Music City Roots.

"In the midst of commercial radio's struggles comes a reminder of its glory days, when stations' soaring transmitter towers seemed like monuments to the broadcasters' influence. Air Castle of the South, by Craig Havighurst, tells the story of one such station, Nashville's WSM-AM. . . . While Mr. Havighurst, a music journalist and documentarian, is most interested in the station's cultural import, Air Castle of the South also presents a fascinating case study in the rise of commercial broadcasting. . . . Mr. Havighurst has done a service in preserving the colorful and instructive history of WSM - and in reminding us that giants once lived on the radio dial."--Wall Street Journal

“Air Castle of the South brings a great deal of existing and new information about WSM into a single location. Havighurst employs a very readable style in presenting the history of this radio station, and there is no doubt that WSM has fostered the dissemination of country music. This book will have tremendous appeal to both general readers and scholars interested in country music.”--James E. Akenson, cochairman, International Country Music Conference, and coeditor of Country Music Goes to War

"This is a vital book in the canons of country music history, but it's also a delightful read because the corporate growth and technological advances are peppered with stories such as Ernest Tubb's arrest for firing a gun in the National Life lobby and Hank Williams's call from jail. Havighurst treats WSM as if it's a character as rich and important as those it made famous, and he recreates the intangible studio moments that evaporate into thin air after reaching listeners' homes."--Weekly Standard

"Havighurst has done a service in preserving the colorful and instructive history of WSM--and in reminding us that giants once lived on the radio dial."--Wall Street Journal

"Havighurst provides impressive detail. . . . [And] has created a fascinating and compelling work, shedding significant new light on how Nashville, 'The Athens of the South,' evolved into Music City USA."--No Depression

"[Air Castle of the South is] a fascinating narrative that describes in exhaustive detail the behind-the-scene stories, larger-than-life characters and an unwieldy trajectory that mirrored the increasing complexity of the broadcasting business in general. . . . [A]n engrossing paean to a station that became an American institution."--Performing Songwriter

"Havighurst and the University of Illinois Press have produced a first-rate history, a biography of a radio station and a town, and a document that will help future generations appreciate the true story of country music. Highly recommended."--Bluegrass Unlimited

"A deeply interesting . . . book. Craig Havighurst tells the tale mostly through a mosaic of biographical bits and pieces about a wide range of major players through the earlier years of the station's development. . . . A useful resource."--Dirty Linen

"4 stars. Riding the airwaves through the history of Nashville's premier radio station."--MOJO

"A well-researched and comprehensive history of one of the most influential radio stations in the history of both broadcasting and country music. . . . Anyone even remotely interested in country music will enjoy this long overdue history of early radio days and the large part one station in particular played in the evolution and dissemination of the genre."--Sing Out

"Craig Havighurst has written an indispensable and long overdue history of WSM, which is likely to stand as the definitive work for some time. This book is a jewel in the crown of the country music list published by the University of Illinois Press."--Michael Streissguth, author of Johnny Cash: The Biography