Backfire: How Sanctions Reshape the World Against U.S. Interests (Hardcover) 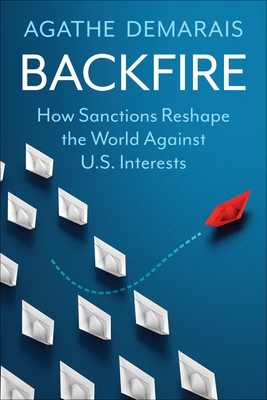 Backfire: How Sanctions Reshape the World Against U.S. Interests (Hardcover)

Sanctions have become the go-to foreign policy tool for the United States. Coercive economic measures such as trade tariffs, financial penalties, and export controls affect large numbers of companies and states across the globe. Some of these penalties target nonstate actors, such as Colombian drug cartels and Islamist terror groups; others apply to entire countries, including North Korea, Iran, and Russia. U.S. policy makers see sanctions as a low-cost tactic, but in reality these measures often fail to achieve their intended goals-and their potent side effects can even harm American interests.

Backfire explores the surprising ways sanctions affect multinational companies, governments, and ultimately millions of people around the world. Drawing on interviews with experts, policy makers, and people in sanctioned countries, Agathe Demarais examines the unintended consequences of the use of sanctions as a diplomatic weapon. The proliferation of sanctions spurs efforts to evade them, as states and firms seek ways to circumvent U.S. penalties. This is only part of the story. Sanctions also reshape relations between countries, pushing governments that are at odds with the U.S. closer to each other-or, increasingly, to Russia and China.

Full of counterintuitive insights spanning a wide range of topics, from Russia's invasion of Ukraine to Iran's COVID response and China's cryptocurrency ambitions, Backfire reveals how sanctions are transforming geopolitics and the global economy-as well as diminishing U.S. influence. This insider's account is an eye-opening, accessible, and timely book that sheds light on the future of sanctions in an increasingly multipolar world.