When Did the Statue of Liberty Turn Green?: And 101 Other Questions about New York City (Hardcover) 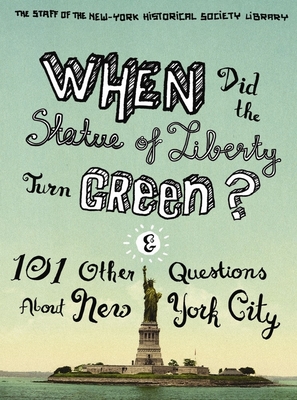 When Did the Statue of Liberty Turn Green?: And 101 Other Questions about New York City (Hardcover)

By The Staff of the New Library, Nina Nazionale, Jean Ashton


Usually Ships in 1-5 Days
For years, the librarians at the New-York Historical Society have kept a record of the questions posed to them by curious New Yorkers and visitors to the city. Who was the first woman to run for mayor of New York? Why are beavers featured on the city's official seal? Is it true that a nineteenth-century New Yorker built a house out of spite? These questions involve people, places, buildings, monuments, rumors, and urban myths. They concern sports, food, transportation, the arts, politics, nature, and Central Park, among many other subjects. Taken together, they attest to the infinite stories hidden within the most intriguing metropolis in the world. In When Did the Statue of Liberty Turn Green? the staff of the New York Historical Society Library answer more than a hundred of the most popular and compelling queries. The endlessly entertaining entries in this book feature hard-to-find data and unforgettable profiles, sharing snapshots of New York's secret history for all to enjoy. Drawing on the library's extensive collections, the staff reveal when the first book was printed in New York, whether the story of Harlem residents presenting rats to government officials is true, who exactly were the Collyer brothers and why were they famous, and why premature babies were once displayed in Coney Island. For readers who love trivia, urban history, strange tales, and, of course, New York City, this book will delight with its rich, informative, and surprising stories. Look inside to learn: How "Peg-Leg" Peter Stuyvesant lost his right leg
Whether Manhattan used to have cowboys
How the New York Yankees got their name
Who was Pig Foot Mary
Why the Manhattan House of Detention is called the Tombs
Who was Topsy and how she electrified New York City
How many speakeasies were open during Prohibition
What occurred every May in the nineteenth century to cause so much commotion
When penguins were stolen from the Coney Island Aquarium.
The New-York Historical Society, a preeminent educational and research institution, is home to both New York City's oldest museum and one of the nation's most distinguished independent research libraries. Each year, the library staff assists more than 5000 researchers on-site and another 5000 remotely. Jean W. Ashton is executive vice president and director of the New-York Historical Society Library. Nina Nazionale is director of library operations at the New-York Historical Society.