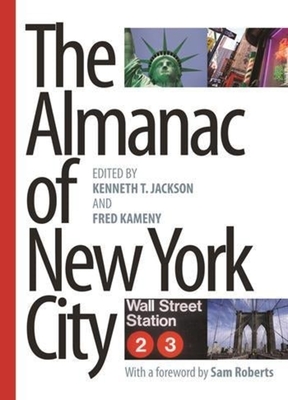 
Usually Ships in 1-5 Days
The Almanac of New York City is an innovative companion for urban enthusiasts. Nowhere else will you find the name of the city's first comptroller (Selah Strong) and Staten Island's most recently designated historic district (Our Lady of Mount Carmel Grotto) next to the city's best-attended cultural institution (The Metropolitan Museum of Art, with five million visitors annually) and its lowest recorded temperature (15 degrees below zero in February 1934). The Almanac identifies the borough with the most residents who relocate to Palm Beach (Queens) and the borough with the highest number of Panamanian immigrants (Brooklyn). It lists where New York currently ranks in the cost of apartment rentals, the rate of obesity in each borough, the details of executions dating back to 1639, per capita income by borough, the longest-running Broadway shows, the winners of the Wanamaker Mile, and the location of celebrated grave sites. Compiled by two longtime historians of the city, The Almanac treats readers to a real New York story, a tale that will delight anyone seeking a deeper understanding of the Big Apple's complex core.
Kenneth T. Jackson is director of the Herbert H. Lehman Center for American History and Jacques Barzun Professor of History at Columbia University. He is a former president of the New-York Historical Society and is editor in chief of The Encyclopedia of New York City.A native of New York City, Fred Kameny received his undergraduate degree at Columbia University and a law degree from the University of North Carolina. He is currently the managing editor of Duke University Press.