The Holocaust by Bullets: A Priest's Journey to Uncover the Truth Behind the Murder of 1.5 Million Jews (Paperback) 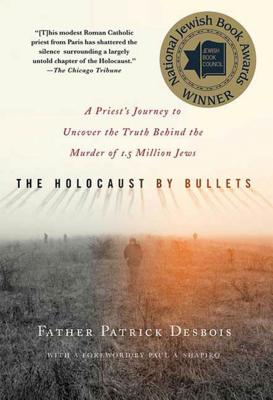 The Holocaust by Bullets: A Priest's Journey to Uncover the Truth Behind the Murder of 1.5 Million Jews (Paperback)

By Father Patrick Desbois, Paul A. Shapiro (Foreword by)

Father Patrick Desbois documents the daunting task of identifying and examining all the sites where Jews were exterminated by Nazi mobile units in the Ukraine in WWII. Using innovative methodology, interviews, and ballistic evidence, he has determined the location of many mass gravesites with the goal of providing proper burials for the victims of the forgotten Ukrainian Holocaust.

Compiling new archival material and many eye-witness accounts, Desbois has put together the first definitive account of one of World War II's bloodiest chapters. Published with the support of the United States Holocaust Memorial Museum.

"[T]his modest Roman Catholic priest from Paris, without using much more than his calm voice and Roman collar, has shattered the silence surrounding a largely untold chapter of the Holocaust." --The Chicago Tribune

Patrick Desbois is secretary to the French Conference of Bishops for relations with Judaism, advisor to the Cardinal-Archbishop of Lyon and advisor to the Vatican on the Jewish religion. Grandson of a deportee to the Rawa Ruska camp, he has set out to investigate the mass murder of Eastern European Jews by the Nazis during the Second World War. He is the winner of the B'nai B'rith International Award for Outstanding Contribution to Relations with the Jewish People. He lives in Paris, France.

“Father Patrick Desbois is a French Catholic priest who, virtually single-handedly, has undertaken the task of excavating the history of previously undocumented Jewish victims of the Holocaust in the former Soviet Union, including an estimated 1.5 million people who were murdered in Ukraine.” —Wall Street Journal

“Part memoir, part prosecutorial brief, The Holocaust by Bullets tells a compelling story in which a priest unconnected by heritage or history is so moved by an injustice he sets out to right a daunting wrong…One might think Holocaust history has been exhausted, but Desbois breaks real news about how an emerging democracy in the New Europe still hasn't emerged from World War II. We have witnessed a decade of forensic excavations documenting genocides in Guatemala, Bosnia and Rwanda, but only now are these same tools being used to find the murdered Jews of Ukraine, thanks in large part to Desbois.” —The Miami Herald

“Father Desbois is a generation too late to save lives. Instead, he has saved memory and history.” —Wall Street Journal

“One of the most moving, troubling and insightful books on the Holocaust, or for that matter any other subject, that I have ever read.” —Eugene J. Fischer, The Catholic Review

“Using a diverse team consisting of a researcher, photographer, interpreter, and ballistics expert, Desbois endeavored to uncover these burial sites and the brutal stories behind them. He uses ample testimony from those who may have witnessed key parts of this brutal process, and he makes some surprising discoveries. The narrative flows because Desbois has such a passion for his subject; he writes simply and well, so that even readers with little initial understanding will learn a lot. The result is an outstanding contribution to Holocaust literature, uncovering new dimensions of the tragedy, and should be on the shelves of even the smallest library. Highly recommended.” —Library Journal, starred review

“An important addition to studies of the Shoah, agonizing to read and utterly necessary.” —Kirkus Reviews

“In Jewish tradition the greatest category of acts one can perform are those of 'loving kindness,' including taking care of the sick, welcoming the stranger, and sheltering the needy. The most treasured of these acts is taking care of the dead because, unlike the others, it cannot be reciprocated. Jewish tradition posits that it is then that the individual most closely emulates God's kindness to humans, which also cannot be reciprocated. Father Patrick Desbois has performed this act of loving kindness not for one person but for hundreds of thousands of people who were murdered in cold blood. He has done so despite the fact that many people would have preferred this story never to be uncovered and others doubted that it ever could be done. His contribution to history and to human memory, as chronicled in this important book, is immeasurable.” —Deborah E. Lipstadt, Ph.D. author of History on Trial: My Day in Court with a Holocaust Denier

“In this very personal and affecting account of his gradual discovery of the events of the Holocaust in the Ukraine Patrick Desbois, a French priest, gives us a widened perspective of the extraordinarily complex manipulation of the local population by the Nazis, who forcibly requisitioned Ukrainian citizens of all ages to assist in the killings. In village after village, more than 60 years after the horrific events, the inhabitants, many of whom had been children at the time, came forward to bear witness. From the many interviews in the text, it is clear that the personal trauma of forced involvement in the mass executions has never diminished. And indeed, the stories of what they saw takes one's breath away. This is a significant addition to the history of the Holocaust that sheds new light on events in the Nazi occupied areas of the former USSR.” —Lynn H. Nicholas, author of Cruel World: The Children of Europe in the Nazi Web and The Rape of Europa: Europe's Treasures in the Third Reich and the Second World War

“Prompted by compassion and intellectual curiosity, Father Desbois revisited the graves of a million and a half Ukrainian Jews, who were murdered during the German occupation. Combining archival sources and ballistic evidence with the voices of Ukrainian eyewitnesses, Father Desbois delivers a complete, harrowing account of what happened. This book is a triumph of historical exploration, deeply moving and profoundly disturbing.” —Nechama Tec, Holocaust Scholar, University of Connecticut in Stamford, and author of the National Jewish Book Award-winning: Resilience and Courage: Women, Men and the Holocaust and of Defiance: The Bielski Partisans

“Father Patrick Desbois gives a horrifying account of dimensions of the Holocaust until now undocumented. His Catholic faith, experiences of his own family, the support of the French bishops and the research capacities of the United States Holocaust Memorial Museum are enabling him to carry out a work of discovery, of healing and reconciliation. This book is a striking contribution to Christian-Jewish relations. We owe him a debt of enormous proportions.” —Francis Cardinal George, O.M.I. Archbishop of Chicago

“[Desbois] is a human bridge between the modern Jewish world and the Catholic Church and a major conduit through which the Holocaust will be remembered.” —The Christian Science Monitor

“[T]his modest Roman Catholic priest from Paris, without using much more than his calm voice and Roman collar, has shattered the silence surrounding a largely untold chapter of the Holocaust when Nazis killed 1.5 million Jews in Ukraine from 1941 to 1944.” —The Chicago Tribune