Theatre and Performance in the Asia-Pacific: Regional Modernities in the Global Era (Studies in International Performance) (Hardcover) 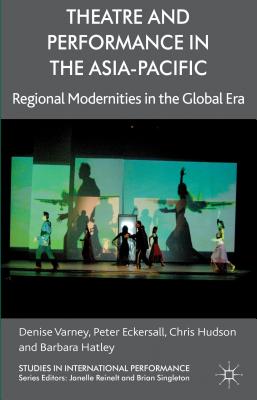 Theatre and Performance in the Asia-Pacific: Regional Modernities in the Global Era (Studies in International Performance) (Hardcover)


Usually Ships in 1-5 Days
Theatre and Performance in the Asia-Pacific is an innovative study of contemporary theatre and performance within the framework of modernity in the Asia-Pacific. It is an analysis of the theatrical imaginative as it manifests in theatre and performance in Australia, Indonesia, Japan and Singapore.
Denise Varney is Associate Professor in Theatre Studies at the University of Melbourne, Australia. Publications include The Dolls' Revolution: Australian Theatre and Cultural Imagination (co-author Rachel Fensham), Theatre in the Berlin Republic (ed.) and Radical Visions: The Impact of the Sixties on Australia Drama. Peter Eckersall is Associate Professor of Theatre Studies in the School of Culture and Communication, University of Melbourne, Australia. Publications include Theorising the Angura Space: avant-garde performance and politics in Japan 1960-2000 (2006) and Kawamura Takeshi's Nippon Wars and Other Plays (ed. 2011). Chris Hudson is Research Leader in the Globalization and Culture Program of the Global Cities Research Institute, and Associate Professor of Asian Cultural Studies in the School of Media and Communication at RMIT University in Melbourne, Australia. Chris has published widely in Asian Cultural Studies. Barbara Hatley is Emeritus Professor of Indonesian in the School of Asian Languages and Studies at the University of Tasmania, Australia, and Adjunct Professor of the School of Languages, Cultures and Linguistics at Monash University, Australia. Publications include Javanese Performances on an Indonesian Stage: Contesting Culture, Embracing Change (2008) and Ketoprak Theatre and the Wayang Tradition (1979).