The Monkey and the Monk: An Abridgment of The Journey to the West (Paperback) 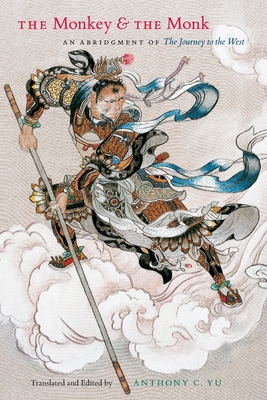 The Monkey and the Monk: An Abridgment of The Journey to the West (Paperback)

By Anthony C. Yu (Translated by)

Anthony C. Yu’s celebrated translation of The Journey to the West reinvigorated one of Chinese literature’s most beloved classics for English-speaking audiences when it first appeared thirty years ago. Yu’s abridgment of his four-volume translation, The Monkey and the Monk, finally distills the epic novel’s most exciting and meaningful episodes without taking anything away from their true spirit.

These fantastic episodes recount the adventures of Xuanzang, a seventh-century monk who became one of China’s most illustrious religious heroes after traveling for sixteen years in search of Buddhist scriptures. Powerfully combining religious allegory with humor, fantasy, and satire, accounts of Xuanzang’s journey were passed down for a millennium before culminating in the sixteenth century with The Journey to the West. Now, readers of The Monkey and the Monk can experience the full force of his lengthy quest as he travels to India with four animal disciples, most significant among them a guardian-monkey known as “the Great Sage, Equal to Heaven.” Moreover, in its newly streamlined form, this acclaimed translation of a seminal work of world literature is sure to attract an entirely new following of students and fans.

“A new translation of a major literary text which totally supersedes the best existing version. . . . It establishes beyond contention the position of The Journey to the West in world literature, while at the same time throwing open wide the doors to interpretive study on the part of the English audience.”—Modern Language Notes, on the unabridged translation

Anthony C. Yu is the Carl Darling Buck Distinguished Service Professor Emeritus in Humanities and Professor, The Divinity School, Departments of East Asian Languages and Civilizations, English Language and Literature, Comparative Literature, and the Committee on Social Thought, The University of Chicago.