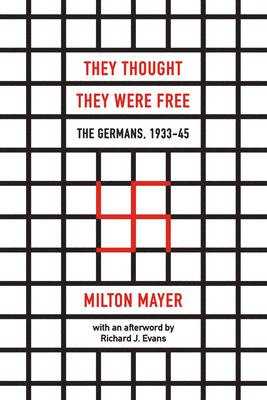 
Usually Ships in 1-5 Days
“When this book was first published it received some attention from the critics but none at all from the public. Nazism was finished in the bunker in Berlin and its death warrant signed on the bench at Nuremberg.”

That’s Milton Mayer, writing in a foreword to the 1966 edition of They Thought They Were Free. He’s right about the critics: the book was a finalist for the National Book Award in 1956. General readers may have been slower to take notice, but over time they did—what we’ve seen over decades is that any time people, across the political spectrum, start to feel that freedom is threatened, the book experiences a ripple of word-of-mouth interest. And that interest has never been more prominent or potent than what we’ve seen in the past year.

They Thought They Were Free is an eloquent and provocative examination of the development of fascism in Germany. Mayer’s book is a study of ten Germans and their lives from 1933-45, based on interviews he conducted after the war when he lived in Germany. Mayer had a position as a research professor at the University of Frankfurt and lived in a nearby small Hessian town which he disguised with the name “Kronenberg.” “These ten men were not men of distinction,” Mayer noted, but they had been members of the Nazi Party; Mayer wanted to discover what had made them Nazis. His discussions with them of Nazism, the rise of the Reich, and mass complicity with evil became the backbone of this book, an indictment of the ordinary German that is all the more powerful for its refusal to let the rest of us pretend that our moment, our society, our country are fundamentally immune.

A new foreword to this edition by eminent historian of the Reich Richard J. Evans puts the book in historical and contemporary context. We live in an age of fervid politics and hyperbolic rhetoric. They Thought They Were Free cuts through that, revealing instead the slow, quiet accretions of change, complicity, and abdication of moral authority that quietly mark the rise of evil.
Milton Mayer (1908–86) was the author of What Can a Man Do? And coauthor of The Revolution in Education. He wrote for the Progressive, Harper’s, and other outlets.

“Milton Mayer’s 1955 classic They Thought They Were Free, recently republished with an afterword by the Cambridge historian Richard J. Evans, was one of the first accounts of ordinary life under Nazism. [It is} dotted with humor and written with an improbably light touch.… In 1951, he returned to Germany to find out what had made Nazism possible.… When Mayer returned home, he was afraid for his own country. He felt … that under the right conditions, he could well have turned out as his German friends did. He learned that Nazism took over Germany not ‘by subversion from within, but with a whoop and a holler.’”
— Cass Sunstein

"A timely reminder of how otherwise unremarkable and in many ways reasonable people can be seduced by demagogues and populists."
— Richard J. Evans, author of

"Mr. Mayer's book is the fruit of a year which he passed in a German university town; it is composed of what might be called a series of meditations upon discussions which he held chiefly with ten former Nazis. Why had these men - including among them a baker, a tailor, a teacher and a policeman - become Nazis in the first place? Why had they participated in the crimes of the movement? How do they feel now after defeat and after the 're-education' of the occupying forces? Mr. Mayer's answers are sensitively worked out."
— NY Herald Tribune

"[Mayer] wrote earnestly without an offensive earnest tone. He took stances without posturing. There is art in that."
— The Washington Post

"Among the many books written on Germany after the collapse of Hitler's Thousand Year Reich, this book by Milton Mayer is one of the most readable and most enlightening...never before has the mentality of the average German under the Nazi regime been made as intelligible to the outsider as in Mr. Mayer's report."
— The New York TImes

"Mayer is a journalist. He is also a man of convictions and a courageous man. Though he is an American, a Jew, and of German descent, he emphasizes that Nazis are--after all--human beings, that most of us have not acted very differently from most of them under comparable circumstances...Mayer's comparisons with American behavior in the matter of the deportation of Japanese citizens during the war on the one hand, in matters concerning the Jenner and McCarthy proceedings on the other, must be shamefacedly accepted."
— American Sociological Review

"[Mayer] was a conscientious objector during World War II and was a leading voice in the pacifist movement."
— Chicago Tribune