My Mother Was a Computer: Digital Subjects and Literary Texts (Paperback) 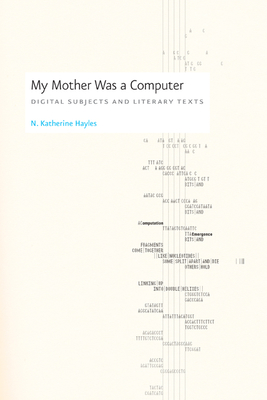 My Mother Was a Computer: Digital Subjects and Literary Texts (Paperback)


Email or call for price
We live in a world, according to N. Katherine Hayles, where new languages are constantly emerging, proliferating, and fading into obsolescence. These are languages of our own making: the programming languages written in code for the intelligent machines we call computers. Hayles's latest exploration provides an exciting new way of understanding the relations between code and language and considers how their interactions have affected creative, technological, and artistic practices.

My Mother Was a Computer explores how the impact of code on everyday life has become comparable to that of speech and writing: language and code have grown more entangled, the lines that once separated humans from machines, analog from digital, and old technologies from new ones have become blurred. My Mother Was a Computer gives us the tools necessary to make sense of these complex relationships. Hayles argues that we live in an age of intermediation that challenges our ideas about language, subjectivity, literary objects, and textuality. This process of intermediation takes place where digital media interact with cultural practices associated with older media, and here Hayles sharply portrays such interactions: how code differs from speech; how electronic text differs from print; the effects of digital media on the idea of the self; the effects of digitality on printed books; our conceptions of computers as living beings; the possibility that human consciousness itself might be computational; and the subjective cosmology wherein humans see the universe through the lens of their own digital age.

We are the children of computers in more than one sense, and no critic has done more than N. Katherine Hayles to explain how these technologies define us and our culture. Heady and provocative, My Mother Was a Computer will be judged as her best work yet.

N. Katherine Hayles is the John Charles Hillis Professor of Literature at the University of California, Los Angeles. She is the author of three books, including How We Became Posthuman: Virtual Bodies in Cybernetics, Literature, and Informatics, and the editor of Chaos and Order: Complex Dynamics in Literature and Science, both published by the University of Chicago Press.