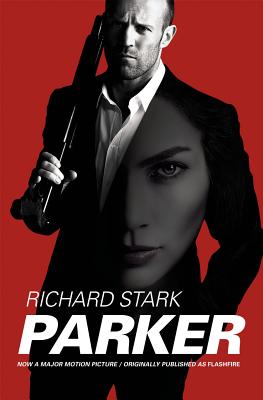 Out of Print
There have been many film adaptations of Richard Stark’s novels over the years, but none of them actually featured a protagonist named Parker—and none of them fully captured Parker’s chilling tenacity and laconic anticharm. Here for the first time is the real Parker, played by Jason Statham. Adapted by Black Swan screenwriter John J. McLaughlin, and directed by Taylor Hackford, Parker is sure to both satisfy Stark fans and action-movie lovers. And there couldn’t be a better Parker novel to bring to the silver screen than the fast-paced and stylish Flashfire.
When Flashfire opens, Parker isn’t happy. Three associates have borrowed his money for a job without permission, and he isn’t satisfied to wait and see if they make good. Instead, he vows to kill them all. Tearing across America to take their job out from under them, Parker finds himself in West Palm Beach. There things go sour. While attempting to trick the denizens of Palm Beach into accepting him for one of their own, Parker is gut-shot and forced to rely on a beautiful civilian, played in the film by Jennifer Lopez, for help. But even injured and exhausted, Parker still has his killer instinct, and he shows how unwise—and deadly—it is to cross him. Part heist movie, part unexpected romance, and mostly explosions, Parker brings to life Stark’s hero with verve and violence, while taking viewers on an action-packed adventure they won’t soon forget.Also starring Michael Chiklis, Nick Nolte, Patti Lupone, and Wendell Pierce, Parker is hitting theaters near you this January. Hard.

Richard Stark was one of the many pseudonyms of Donald E. Westlake (1933–2008), a prolific author of crime fiction. In 1993, the Mystery Writers of America bestowed the society’s highest honor on Westlake, naming him a Grand Master.

“A book by this guy is cause for happiness.”

“Whatever Stark writes, I read. He’s a stylist, a pro, and I thoroughly enjoy his attitude.”

“Richard Stark’s Parker novels . . . are among the most poised and polished fictions of their time and, in fact, of any time.”
— John Banville

“Westlake knows precisely how to grab a reader, draw him or her into the story, and then slowly tighten his grip until escape is impossible.”
— Washington Post Book World

“Donald Westlake’s Parker novels are among the small number of books I read over and over. Forget all that crap you’ve been telling yourself about War and Peace and Proust—these are the books you’ll want on that desert island.”
— Lawrence Block

“Parker is a brilliant invention. . . . What chiefly distinguishes Westlake, under whatever name, is his passion for process and mechanics. . . . Parker appears to have eliminated everything from his program but machine logic, but this is merely protective coloration. He is a romantic vestige, a free-market anarchist whose independent status is becoming a thing of the past.”
— Luc Sante

“Stark/Westlake is the cleanest of all noir novelists, a styleless stylist who gets to the point with stupendous economy, hustling you down the path of plot so briskly that you have to read his books a second time to appreciate the elegance and sober wit with which they are written."
— Terry Teachout

“Richard Stark writes a harsh and frightening story of criminal warfare and vengeance with economy, understatement and a deadly amoral objectivity—a remarkable addition to the list of the shockers that the French call roman noirs.”
— Anthony Boucher

"If you're a fan of noir novels and haven't yet read Richard Stark, you may want to give these books a try. Who knows? Parker may just be the son of a bitch you've been searching for."
— John McNally

"The University of Chicago Press has recently undertaken a campaign to get Parker back in print in affordable and handsome editions, and I dove in. And now I get it."

"Whether early or late, the Parker novels are all superlative literary entertainments."