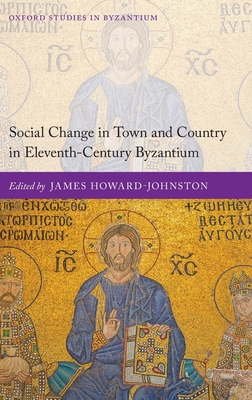 
Usually Ships in 1-5 Days
The history of Byzantium pivots around the eleventh century, during which it reached its apogee in terms of power, prestige, and territorial extension, only then to plunge into steep political decline following serious military defeats and extensive territorial losses. The political, economic,
and intellectual history of the period is reasonably well understood, but not so what was happening in that crucial intermediary sphere, the social order, which both shaped and was shaped by contemporary ideas and brute economic developments. This volume aims to deepen understanding of Byzantine society by examining material evidence for settlements and production in different regions and by sifting through the far from plentiful literary and documentary sources in order to track what was happening in town and country. There is evidence
of significant change: the pattern of landownership continued to shift in favour of those with power and wealth, but there was sustained and effective resistance from peasant villages. Provincial towns prospered in what was an era of sustained economic growth, and, through newly emboldened local
elites, took a more active part in public affairs. In the capital the middling classes, comprising much of officialdom and leading traders, gained in importance, while the twin military and civilian elites were merging to form a single governing class. However, despite this social upheaval, careful
analysis of these various factors by a range of leading Byzantine historians and archaeologists leads to the overarching conclusion that it was not so much internal structural changes which contributed to the vertiginous decline suffered by Byzantium in the late eleventh century, as the
unprecedented combination of dangerous adversaries on different fronts, in the east, north, and west.

James Howard-Johnston, Emeritus Fellow, Corpus Christi College, Oxford James Howard-Johnston is an Emeritus Fellow of Corpus Christi College, Oxford. He was previously a Junior Research Lecturer at Christ Church, Oxford between 1966 and 1971, Junior Fellow at Dumbarton Oaks, Washington D.C. from 1968-9, and University Lecturer in Byzantine Studies at the University ofOxford and Fellow of Corpus Christi College from 1971 until 2009. He has also served as both an Oxford City Councillor and an Oxfordshire County Councillor and is married to the novelist Angela Huth.