Sciences of the Soul and Intellect, Part I: An Arabic Critical Edition and English Translation of Epistles 32-36 (Epistles of the Brethren of Purity) (Hardcover) 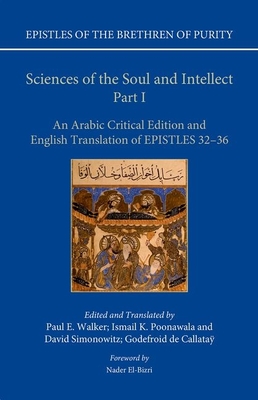 Sciences of the Soul and Intellect, Part I: An Arabic Critical Edition and English Translation of Epistles 32-36 (Epistles of the Brethren of Purity) (Hardcover)


Usually Ships in 1-5 Days
The Ikhwan al-Safa (Brethren of Purity), the anonymous adepts of a tenth-century esoteric fraternity based in Basra and Baghdad, hold an eminent position in the history of science and philosophy in Islam due to the wide reception and assimilation of their monumental encyclopaedia, the Rasa'il
Ikhwan al-Safa (Epistles of the Brethren of Purity). This compendium contains fifty-two epistles offering synoptic accounts of the classical sciences and philosophies of the age; divided into four classificatory parts, it treats themes in mathematics, logic, natural philosophy, psychology,
metaphysics, and theology, in addition to didactic fables.
Epistles 32 to 36 comprise the first five treatises in the third division of the Rasa'il, on the sciences of the soul and intellect. Combining Islamic revelation with Hellenistic philosophy, the Ikhwan delineate herein their metaphysical system. Epistles 32 and 33 present adaptations of the
Pythagorean doctrines, and of Neo-Platonist leitmotifs, whereby a numerical analogy is applied to the unique and transcendent God, or the One, from whom all existence emanates. Epistle 34 takes up the pervasive theme of the correspondence between microcosm and macrocosm, situating the human being as
the central link between the celestial and terrestrial realms. In Epistle 35, we find an explanation of the intellectual faculties of the individual human soul, whose ultimate aim is ascension to the timeless reality of pure intellect. Finally, Epistle 36 presents itself as the astrological epistle
par excellence of the Rasa'il; from the coming-to-be of worms, to the emergence of religions and empires, nothing in the sub-lunar sphere escapes the determining influence of the celestial cycles.
Paul E. Walker (Ph.D. University of Chicago, 1974) was director of the American Research Center in Egypt for over ten years (1976-86). He is currently Deputy Director for Academic Programs, Center for Middle Eastern Studies at the University of Chicago. As a specialist in the history of the Islamicthought, he has published over twelve books, among them Early Philosophical Shiism (Cambridge, 1993); Hamid al-Din al-Kirmani: Ismaili Thought in the Age of al-Hakim (London, 1999); The Advent of the Fatimids (with Wilferd Madelung; London, 2000); Exploring an Islamic Empire: Fatimid History and ItsSources (London, 2002); and Caliph of Cairo: al-Hakim bi-Amr Allah, 996-1021 (Cairo, 2009). David Simonowitz is Assistant Professor of Middle East Studies at Pepperdine University in Malibu, California, having gained his PhD in Islamic Studies at the University of California, Los Angeles in 2004. He now specializes in the study of the history of Muslim communal practices that bridgelanguage, text (in the broadest sense), and space, whether ritual, social, or discursive. Ismail K. Poonawala is Professor of Arabic & Islamic Studies at the University of California, Los Angeles, where he has worked since 1974, after completing his PhD on Islamic Studies in 1968. He has also taught at McGill and Harvard universities. As well as contributing widely to variousencyclopaedias, he was written many articles and books, including Biobibliography of Isma 'ili Literature (1977) and, more recently, a critical edition of al-Sijistani's Kitab al-Maqalid al-malakutiyya (2011). Godefroid de Callatay is Professor of Arabic and Islamic Studies at the Oriental Institute of the University of Louvain. He has specialized in the history of Arabic sciences and philosophy, and the role played by Islam in the transmission of knowledge from Greek Antiquity to the Latin West duringthe Middle Ages. Amongst other subjects, he has published extensively on the Rasa'il Ikhwan al-Safa, and already contributed to the present series by editing, together with Bruno Halflants, the short version of the Epistle on Magic (52a). Since 2012, he also directs 'Speculum Arabicum', a project oncomparative medieval encyclopaedism at the University of Louvain.