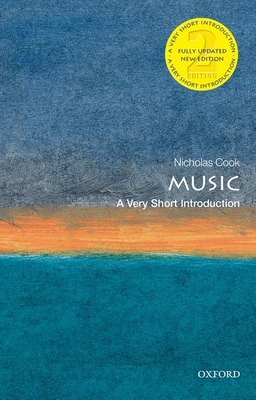 
Usually Ships in 1-5 Days
Very Short Introductions: Brilliant, Sharp, Inspiring The world teems with different kinds of music--traditional, folk, classical, jazz, rock, pop--and each type of music tends to come with its own way of thinking. Drawing on a wealth of accessible examples ranging from Beethoven to Chinese zither music, this Very Short Introduction considers the history of music and thinking about music, focussing on its social and cultural dimensions. Nicholas Cook balances the Western Classical traditions within the context of many other musical cultures in today's world, tracing the way in which their development since the eighteenth century has conditioned present-day thinking and practice both within and beyond the West. He also considers the nature of music as a real-time performance practice; the role of music in contexts of social and political action; and the nature of musical thinking, including the roles played in it by instruments, notations, and creative imagination. In this new edition Cook explores the impact of digital technology on the production and consumption of music, including how it has transformed participatory music-making and the music business. He also discusses music's position in a globalized world, from the role it played in historical processes of colonisation and decolonisation to its present-day significance as a vehicle of cross-cultural communication. ABOUT THE SERIES: The Very Short Introductions series from Oxford University Press contains hundreds of titles in almost every subject area. These pocket-sized books are the perfect way to get ahead in a new subject quickly. Our expert authors combine facts, analysis, perspective, new ideas, and enthusiasm to make interesting and challenging topics highly readable.

Nicholas Cook, 1684 Professor of Music Emeritus, University of Cambridge Nicholas Cook is Emeritus Professor of Music at the University of Cambridge. He has published widely across many fields of music studies; his book The Schenker Project: Culture, Race, and Music Theory in Fin-de-siecle Vienna (2007) won the SMT's Wallace Berry Award, while his most recent book is Music as Creative Practice (2018). Director of the AHRC Research Centre for the History and Analysis of Music (CHARM) from 2004-9, he was elected Fellow of the British Academy in 2001 and holds a Doctorate of Humane Letters from the University of Chicago.