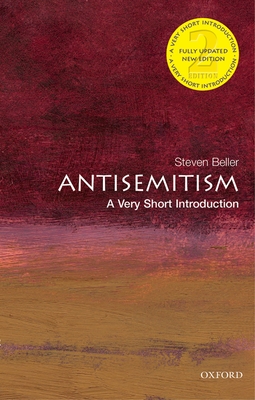 
Usually Ships in 1-5 Days
Antisemitism, as hatred of Jews and Judaism, has been a central problem of Western civilization for millennia, and its history continues to invite debate. This Very Short Introduction untangles the history of the phenomenon, from ancient religious conflict to 'new' antisemitism in the 21st century. Steven Beller reveals how Antisemitism grew as a political and ideological movement in the 19th century, how it reached its dark apogee in the worst genocide in modern history - the Holocaust - and how Antisemitism still persists around the world today. In the new edition of this thought-provoking Very Short Introduction, Beller brings his examination of this complex and still controversial issue up to date with a discussion of Antisemitism in light of the 2008 financial crash, the Arab Spring, and the on-going crisis between Israel and Palestine. ABOUT THE SERIES:
The Very Short Introductions series from Oxford University Press contains hundreds of titles in almost every subject area. These pocket-sized books are the perfect way to get ahead in a new subject quickly. Our expert authors combine facts, analysis, perspective, new ideas, and enthusiasm to make interesting and challenging topics highly readable.

Steven Beller is a Visiting Scholar at George Washington University, Washington DC, and a former Research Fellow in History at Peterhouse College, Cambridge. His previous books include Democracy: All That Matters (Hodder & Stoughton, 2013) and A Concise History of Austria (Cambridge University Press, 2006).