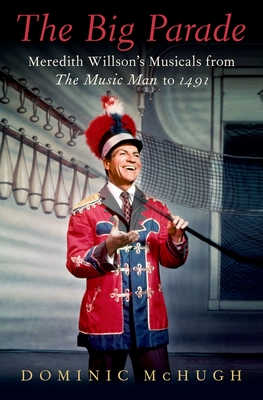 
Usually Ships in 1-5 Days
In the 1950s, Meredith Willson's The Music Man became the third longest running musical after My Fair Lady and The Sound of Music: a considerable achievement in a decade that saw the premieres of other popular works by Rodgers and Hammerstein and Lerner and Loewe, not to mention Frank
Loesser's Guys and Dolls and Bernstein and Sondheim's West Side Story. The Music Man remains a popular choice for productions and has been parodied or quoted on television shows ranging from Family Guy to Grace and Frankie. Though Willson is best remembered for The Music Man, there is a great deal more to his career as a composer and lyricist. In The Big Parade, author Dominic McHugh uses newly uncovered letters, manuscripts, and production files to reveal Willson's unusual combination of experiences in his
pre-Broadway career that led him to compose The Music Man at the age of 55. McHugh also gives an in depth look at the reception of The Music Man and examines the strengths and weaknesses of Willson's other three musicals, with his sustained commitment to innovation and novelty. The Big Parade is
packed with new revelations about the processes involved in writing these works, as well as the trials and tribulations of working in the commercial theatre.

Dominic McHugh is Professor of Musicology at the University of Sheffield. He has published widely on the Broadway and Hollywood musicals, including six previous books, and has collaborated with many of the world's leading arts organisations, ranging from the Sydney Opera House to the Library ofCongress.