Operation Barbarossa: The History of a Cataclysm (Hardcover) 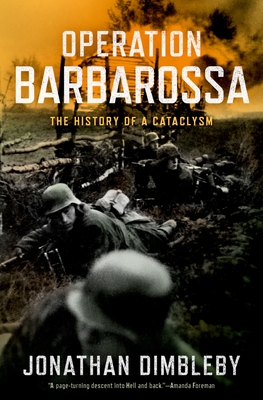 Operation Barbarossa: The History of a Cataclysm (Hardcover)


Usually Ships in 1-5 Days
Author of an acclaimed history of the Battle of the Atlantic during World War Two (OUP 2016), Jonathan Dimbleby now offers a compelling account of the largest military operation not only of World War Two but of all time--the invasion of Russia by Nazi Germany in 1941. Often seen as the turning point of the war in Europe, Operation Barbarossa turned allies into mortal enemies, triggering the atrocities that would characterize the Holocaust. Historians have spent generations puzzling over Barbarossa. For Hitler and the other Nazi leaders, who began planning the invasion even as the pact with the Soviets was in full force, the invasion would annihilate communism, eradicate inferior races, and provide the German people (and military) with resources that would guarantee not just survival but global domination. What followed was catastrophe. Between June, when the invasion began, and December 1941, when it stalled, some six million men were killed, wounded, or registered as missing in action. Soldiers on both sides committed atrocities on a scale that few events in the history of warfare can rival. When German commanders were forced to retreat, it was clear to the world clear that the German war machine was not only not infallible but fatally weakened. Once the invasion began to falter, it all but guaranteed the Germans would eventually lose the war. Operation Barbarossa has been much written about in histories of World War Two. However, no single general-audience book focused purely on the operation dominates the field, either covering only aspects of what was a massive undertaking or simply outdated. Moreover, Dimbleby's book makes ample use of memoirs, diaries, and letters, along with unpublished and untranslated correspondence from newly opened Russian archives. It promises to become the standard general history of Operation Barbarossa.

Jonathan Dimbleby is a journalist, writer and filmmaker. His books include Destiny in the Desert: The Road to El Alamein and The Battle for the Atlantic, which Max Hastings called "an exceptionally vivid account of one of the critical campaigns of the Second World War by a masterly writer."