Our Own Worst Enemy: The Assault from Within on Modern Democracy (Hardcover) 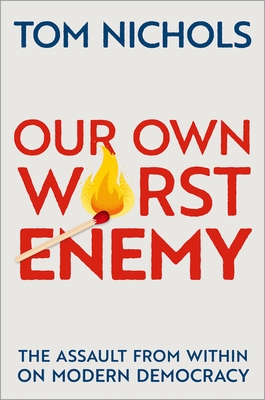 Our Own Worst Enemy: The Assault from Within on Modern Democracy (Hardcover)


Usually Ships in 1-5 Days
A contrarian yet highly engaging account of the spread of illiberal and anti-democratic sentiment throughout our culture that places responsibility on the citizens themselves. Over the past three decades, citizens of democracies who claim to value freedom, tolerance, and the rule of law have increasingly embraced illiberal politicians and platforms. Democracy is in trouble--but who is really to blame? In Our Own Worst Enemy, Tom Nichols challenges the current depictions of the rise of illiberal and anti-democratic movements in the United States and elsewhere as the result of the deprivations of globalization or the malign decisions of elites. Rather, he places the blame for the rise of illiberalism on the people themselves. Nichols traces the illiberalism of the 21st century to the growth of unchecked narcissism, rising standards of living, global peace, and a resistance to change. Ordinary citizens, laden with grievances, have joined forces with political entrepreneurs who thrive on the creation of rage rather than on the encouragement of civic virtue and democratic cooperation. While it will be difficult, Nichols argues that we need to defend democracy by resurrecting the virtues of altruism, compromise, stoicism, and cooperation--and by recognizing how good we've actually had it in the modern world. Trenchant, contrarian, and highly engaging, Our Own Worst Enemy reframes the debate about how democracies have ended up in this dire state of affairs and what to do about it.

Tom Nichols, Professor of National Security Affairs, US Naval War College Tom Nichols is Professor Emeritus of National Security Affairs, US Naval War College, and a staff writer at The Atlantic. He is the author of The Death of Expertise (Oxford 2017), No Use: Nuclear Weapons and US National Security (2013), and Eve of Destruction: The Coming Age of Preventive War (2008). He is also an instructor at the Harvard Extension School and an adjunct professor at the US Air Force School of Strategic Force Studies. He is a former aide in the US Senate and has been a Fellow of the International Security Program at the John F. Kennedy School of Government at Harvard University.