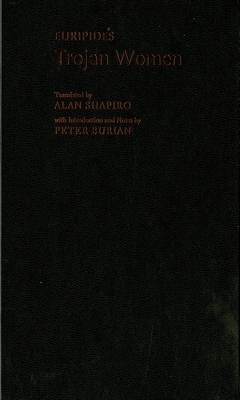 Among surviving Greek tragedies only Euripides' Trojan Women shows us the extinction of a whole city, an entire people. Despite its grim theme, or more likely because of the centrality of that theme to the deepest fears of our own age, this is one of the relatively few Greek tragedies that regularly finds its way to the stage. Here the power of Euripides' theatrical and moral imagination speaks clearly across the twenty-five centuries that separate our world from his. The theme is really a double one: the suffering of the victims of war, exemplified by the woman who survive the fall of Troy, and the degradation of the victors, shown by the Greeks' reckless and ultimately self-destructive behavior. It offers an enduring picture of human fortitude in the midst of despair. Trojan Women gains special relevance, of course, in times of war. It presents a particularly intense account of human suffering and uncertainty, but one that is also rooted in considerations of power and policy, morality and expedience. Furthermore, the seductions of power and the dangers both of its exercise and of resistance to it as portrayed in Trojan Women are not simply philosophical or rhetorical gambits but part of the lived experience of Euripides' day. And their analogues in our own day lie all too close at hand. This new powerful translation of Trojan Women includes an illuminating introduction, explanatory notes, a glossary, and suggestions for further reading.

Peter Burian is Professor of Classical & Comparative Literatures and Theater Studies, Duke University. Alan Shapiro is Professor of English and Creative Writing, University of North Carolina at Chapel Hill. A winner of the prestigious Lila Wallace Reader's Digest award for 1992-95, he is the author of several poetry collections, including Tantalus in Love, Song and Dance, and The Dead Alive and Busy.