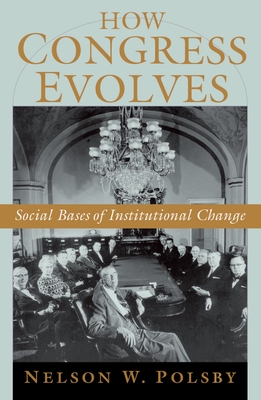 
Usually Ships in 1-5 Days
(This book cannot be returned.)
In this greatly entertaining tale of one of our most august institutions, Nelson Polsby argues that among other things, from the 50's to the 90's, Congress evolved. In short, Polsby argues that air conditioning altered the demography of the southern states, which in turn changed the political parties of the South, which transformed the composition and in due course the performance of the US House of Representatives. This evolutionary process led to the House's liberalization and later to its transformation into an arena of sharp partisanship, visible among both Democrats and Republicans. How Congress Evolves breathes new life into the dusty corners of institutional history, and offers a unique explanation for important transformations in the congressional environment.
Nelson Polsby is Heller Professor of Political Science at the University of California, Berkeley where he has taught American politics and government since 1967. A close Congress watcher for more than 40 years, he is the author of, among others, Congress and the Presidency, and Presidential Elections (with Aaron Wildavsky, 10th edition.) He is editor of the Annual Review of Political Science and writes often for the Op-ed pages of the LA Times, Boston Globe, New York Times, Wall Street Journal and Washington Post.