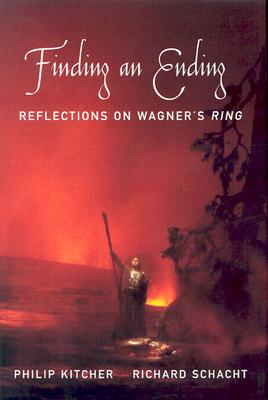 
Email or call for price
Few musical works loom as large in Western culture as Richard Wagner's four-part Ring of the Nibelung. In Finding an Ending, two eminent philosophers, Philip Kitcher and Richard Schacht, offer an illuminating look at this greatest of Wagner's achievements, focusing on its far-reaching and subtle exploration of problems of meanings and endings in this life and world. Kitcher and Schacht plunge the reader into the heart of Wagner's Ring, drawing out the philosophical and human significance of the text and the music. They show how different forms of love, freedom, heroism, authority, and judgment are explored and tested as it unfolds. As they journey across its sweeping musical-dramatic landscape, Kitcher and Schacht lead us to the central concern of the Ring--the problem of endowing life with genuine significance that can be enhanced rather than negated by its ending, if the right sort of ending can be found. The drama originates in Wotan's quest for a transformation of the primordial state of things into a world in which life can be lived more meaningfully. The authors trace the evolution of Wotan's efforts, the intricate problems he confronts, and his failures and defeats. But while the problem Wotan poses for himself proves to be insoluble as he conceives of it, they suggest that his very efforts and failures set the stage for the transformation of his problem, and for the only sort of resolution of it that may be humanly possible--to which it is not Siegfried but rather Br nnhilde who shows the way. The Ring's ending, with its passing of the gods above and destruction of the world below, might seem to be devastating; but Kitcher and Schacht see a kind of meaning in and through the ending revealed to us that is profoundly affirmative, and that has perhaps never been so powerfully and so beautifully expressed.

Philip Kitcher is John Dewey Professor of Philosophy at Columbia University. He is the author of seven previous books, is a past president of the American Philosophical Association (Pacific Division), and is a Fellow of the American Academy of Arts and Sciences. He currently holds the Romanell Professorship in Philosophy, awarded annually by Phi Beta Kappa. Richard Schacht is Professor of Philosophy and Jubilee Professor of Liberal Arts and Sciences, at the University of Illinois at Urbana-Champaign. His previous books include Hegel and After, Nietzsche, The Future of Alienation, and Making Sense of Nietzsche.