Online Courts and the Future of Justice (Paperback) 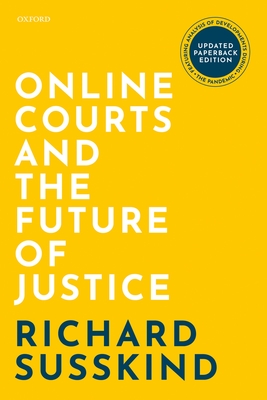 Online Courts and the Future of Justice (Paperback)


Usually Ships in 1-5 Days
Our court system is struggling. It is too costly to deliver justice for all but the few, too slow to satisfy those who can access it. Yet the values implicit in disputes being resolved in person, and in public, are fundamental to how we have imagined the fair resolution of disputes for centuries. Could justice be delivered online? The idea has excited and appalled in equal measure, promising to bring justice to all, threatening to strike at the heart of what we mean by justice. With online courts now moving from idea to reality, we are looking at the most fundamental change to our justice system for centuries, but the public understanding of and debate about the revolution is only just beginning.
In Online Courts and the Future of Justice Richard Susskind, a pioneer of rethinking law for the digital age, confronts the challenges facing our legal system and the potential for technology to bring much needed change. Drawing on years of experience leading the discussion on conceiving and delivering online justice, Susskind here charts and develops the public debate. Against a background of austerity politics and cuts to legal aid, the public case for online courts has too often been framed as a business case by both sides of the debate. Are online courts preserving the public bottom line by finding efficiencies? Or sacrificing the interests of the many to deliver cut price justice? Susskind broadens the debate by making the moral case (whether online courts are required by principles of justice) and the jurisprudential case (whether online courts are compatible with our understanding of judicial process and constitutional rights) for delivering justice online. Includes a substantial new chapter updating the book with the developments in online courts since the onset of Covid-19.