Breached!: Why Data Security Law Fails and How to Improve It (Hardcover) 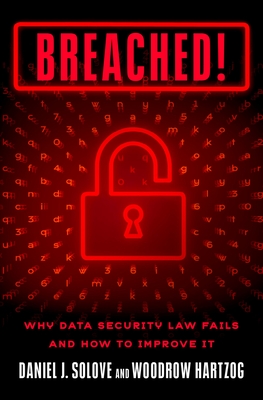 Breached!: Why Data Security Law Fails and How to Improve It (Hardcover)


Usually Ships in 1-5 Days
A novel account of how the law contributes to the insecurity of our data and a bold way to rethink it. Digital connections permeate our lives-and so do data breaches. Given that we must be online for basic communication, finance, healthcare, and more, it is alarming how difficult it is to create rules for securing our personal information. Despite the passage of many data security laws, data breaches are increasing at a record pace. In Breached , Daniel Solove and Woodrow Hartzog, two of the world's leading experts on privacy and data security, argue that the law fails because, ironically, it focuses too much on the breach itself. Drawing insights from many fascinating stories about data breaches, Solove and Hartzog show how major breaches could have been prevented or mitigated through a different approach to data security rules. Current law is counterproductive. It pummels organizations that have suffered a breach but doesn't address the many other actors that contribute to the problem: software companies that create vulnerable software, device companies that make insecure devices, government policymakers who write regulations that increase security risks, organizations that train people to engage in risky behaviors, and more. Although humans are the weakest link for data security, policies and technologies are often designed with a poor understanding of human behavior. Breached corrects this course by focusing on the human side of security. Drawing from public health theory and a nuanced understanding of risk, Solove and Hartzog set out a holistic vision for data security law-one that holds all actors accountable, understands security broadly and in relationship to privacy, looks to prevention and mitigation rather than reaction, and works by accepting human limitations rather than being in denial of them. The book closes with a roadmap for how we can reboot law and policy surrounding data security.

Daniel J. Solove is the John Marshall Harlan Research Professor of Law at the George Washington University Law School. He is also the founder of TeachPrivacy, a company that provides privacy and data security training programs to businesses, law firms, healthcare institutions, schools, and other organizations. One of the world's leading experts in privacy law, Solove is the author of several books and textbooks. Professor Solove blogs at Privacy+Security Blog and as a LinkedIn "thought leader." Woodrow Hartzog is a Professor of Law and Computer Science at Northeastern University School of Law and the Khoury College of Computer Sciences. He is the author of Privacy's Blueprint, and his research on privacy, media, and robotics has been published in both scholarly and popular publications. He has testified multiple times before Congress and has been quoted or referenced in numerous articles and broadcasts, including NPR, BBC, and The Wall Street Journal.