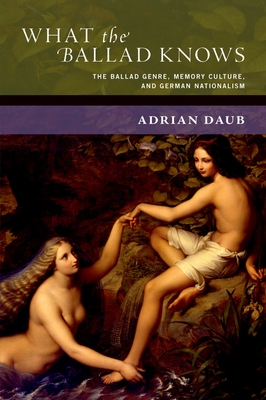 
Usually Ships in 1-5 Days
(This book cannot be returned.)
Over the course of the 19th century, ballads proliferated in German-speaking Europe in a truly remarkable range of contexts. Audiences were of course likely encounter balladry in the volumes of Goethe and Schiller, in various anthologies or illustrated editions. But they were just as likely to
come across objects billed as ballads in recitation evenings by popular actors, in song-settings by Schubert and Loewe, in piano pieces by Chopin, in the opera house and the concert hall, in mass-produced drawings, paintings and even chinaware. Ballads were poems one could use - schoolteachers used
them to train their students' memory (or punish them), women composers used them to assert their place in the musical canon, actors used them to bolster their income, mothers used them to put their children to sleep. Ballads intersected with gender and class, promising to democratize art, while in
fact helping make distinctions. In What the Ballad Knows: The Ballad Genre, Memory Culture and German Nationalism, Adrian Daub tells the story of this itinerant genre across media, periods, regions and social strata and shows that, even though it was often positioned as an authentic product of
German spirit, the ballad frequently unsettled and subverted the national project. The popular imagination rooted these poems in pre-modern oral culture, among bards and peasants in the everyday life of common folk. But in fact nineteenth-century ballads were in the end all about modernity DS
modern modes of association, of attention, of dissemination.

Adrian Daub is Professor of German Literature and Comparative Literature at Stanford University and author of Uncivil Unions: The Metaphysics of Marriage in German Idealism and Romanticism (2012), Four-Handed Monsters: Four-Hand Piano Playing and Nineteenth-Century Culture (OUP, 2014), and The Dynastic Imagination: Family and Modernity in Nineteenth Century Germany (2020). He is co-author with Charles Kronengold of The James Bond Songs: Pop Anthems of Late Capitalism (OUP, 2015).