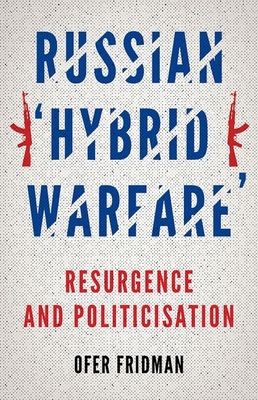 
Email or call for price
During the last decade, 'Hybrid Warfare' has become a novel yet controversial term in academic, political and professional military lexicons, intended to suggest some sort of mix between different military and non-military means and methods of confrontation. Enthusiastic discussion of the notion has been undermined by conceptual vagueness and political manipulation, particularly since the onset of the Ukrainian Crisis in early 2014, as ideas about Hybrid Warfare engulf Russia and the West, especially in the media. Western defense and political specialists analyzing Russian responses to the crisis have been quick to confirm that Hybrid Warfare is the Kremlin's main strategy in the twenty-first century. But many respected Russian strategists and political observers contend that it is the West that has been waging Hybrid War, Gibridnaya Voyna, since the end of the Cold War. In this highly topical book, Ofer Fridman offers a clear delineation of the conceptual debates about Hybrid Warfare. What leads Russian experts to say that the West is conducting a Gibridnaya Voyna against Russia, and what do they mean by it? Why do Western observers claim that the Kremlin engages in Hybrid Warfare? And, beyond terminology, is this something genuinely new?
Ofer Fridman is Director of Operations at the King's Centre for Strategic Communications (KCSC) and a research fellow at the Department of War Studies, King's College London.