Congress and the Media: Beyond Institutional Power (Paperback) 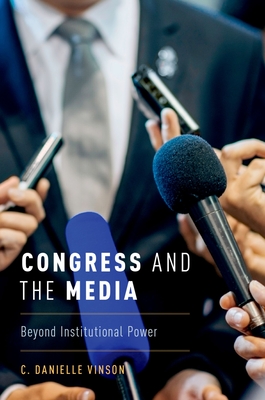 Congress and the Media: Beyond Institutional Power (Paperback)


Usually Ships in 1-5 Days
Over the last four decades, members of Congress have increasingly embraced media relations as a way to influence national policymaking and politics. In 1977, nearly half of congressional members had no press secretary. Today, media relations is a central component of most congressional offices, and more of that communications effort is directed toward national media, not just the local press. Arguing that members of Congress turn to the media to enhance their formal powers or to compensate for their lack of power, Congress and the Media explains why congressional members go public and when they are likely to succeed in getting coverage. Vinson uses content analysis of national newspaper and television coverage of congressional members over time and members' messages on social media as well as case studies to examine how members in different political circumstances use the media to try to influence policymaking and how this has changed over time. She finds that members'
institutional position, the political context, increasing partisan polarization, and journalists' evolving notions of what is newsworthy all affect which congressional members are interested in and successful in gaining media coverage of their messages and what they hope to accomplish by going public. Ultimately, Congress and the Media suggests that going public can be a way for members of Congress to move beyond their institutional powers, but the strategy is not equally available to all members nor effective for all goals.