Civil Resistance: What Everyone Needs to Know(r) (Paperback) 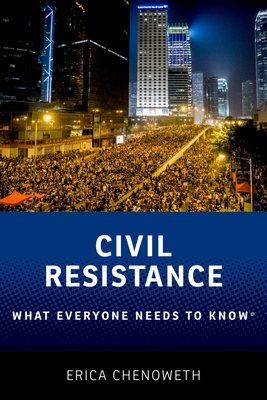 Civil Resistance: What Everyone Needs to Know(r) (Paperback)


Usually Ships in 1-5 Days
A sweeping overview of civil resistance movements around the world that explains what they are, how they work, why they are often effective, and why they can fail. Civil resistance is a method of conflict through which unarmed civilians use a variety of coordinated methods (strikes, protests, demonstrations, boycotts, and many other tactics) to prosecute a conflict without directly harming or threatening to harm an opponent. Sometimes called nonviolent resistance, unarmed struggle, or nonviolent action, this form of political action is now a mainstay across the globe. It was been a central form of resistance in the 1989 revolutions and in the Arab Spring, and it is now being practiced widely in Trump's America. If we are going to understand the manifold protest movements emerging around the globe, we need a thorough understanding of civil resistance and its many dynamics and manifestations. In Civil Resistance: What Everyone Needs to Know(R) , Erica Chenoweth -- one of the world's leading scholars on the topic--explains what civil resistance is, how it works, why it sometimes fails, how violence and repression affect it, and the long-term impacts of such resistance. Featuring both historical cases of civil resistance and more contemporary examples such as the Arab Awakenings and various ongoing movements in the United States, this book provides a comprehensive yet pithy overview of this enormously important subject.

Erica Chenoweth is the Berthold Beitz Professor in Human Rights & International Affairs at Harvard's Kennedy School of Government. Foreign Policy ranked Chenoweth among the Top 100 Global Thinkers of 2013 for "proving Gandhi right." Chenoweth also won the 2014 Karl Deutsch Award, given annually by the International Studies Association to the scholar under 40 who has made the most significant impact on the field of international politics or peace research. Chenoweth is the co-author of Why Civil Resistance Works, which won the American Political Science Association's Woodrow Wilson Prize, the most prestigious award in the field.