Streams of Gold, Rivers of Blood: The Rise and Fall of Byzantium, 955 A.D. to the First Crusade (Paperback) 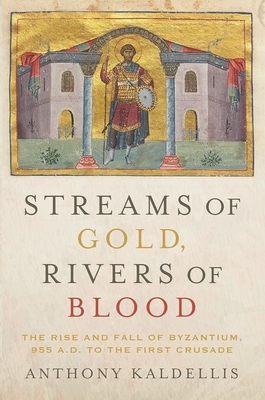 Streams of Gold, Rivers of Blood: The Rise and Fall of Byzantium, 955 A.D. to the First Crusade (Paperback)


Usually Ships in 1-5 Days
(This book cannot be returned.)
In the second half of the tenth century, Byzantium embarked on a series of spectacular conquests: first in the southeast against the Arabs, then in Bulgaria, and finally in the Georgian and Armenian lands. By the early eleventh century, the empire was the most powerful state in the Mediterranean. It was also expanding economically, demographically, and, in time, intellectually as well. Yet this imperial project came to a crashing collapse fifty years later, when political disunity, fiscal mismanagement, and defeat at the hands of the Seljuks in the east and the Normans in the west brought an end to Byzantine hegemony. By 1081, not only was its dominance of southern Italy, the Balkans, Caucasus, and northern Mesopotamia over but Byzantium's very existence was threatened. How did this dramatic transformation happen? Based on a close examination of the relevant sources, this history-the first of its kind in over a century-offers a new reconstruction of the key events and crucial reigns as well as a different model for understanding imperial politics and wars, both civil and foreign. In addition to providing a badly needed narrative of this critical period of Byzantine history, Streams of Gold, Rivers of Blood offers new interpretations of key topics relevant to the medieval era. The narrative unfolds in three parts: the first covers the years 955-1025, a period of imperial conquest and consolidation of authority under the great emperor Basil "the Bulgar-Slayer." The second (1025-1059) examines the dispersal of centralized authority in Constantinople as well as the emergence of new foreign enemies (Pechenegs, Seljuks, and Normans). The last section chronicles the spectacular collapse of the empire during the second half of the eleventh century, concluding
with a look at the First Crusade and its consequences for Byzantine relations with the powers of Western Europe. This briskly paced and thoroughly investigated narrative vividly brings to life one of the most exciting and transformative eras of medieval history.

Anthony Kaldellis is Professor of Greek and Latin at The Ohio State University. Author of The Christian Parthenon: Classicism and Pilgrimage in Byzantine Athens (CUP 2009) and Hellenism in Byzantium: The Transformations of Greek Identity and the Reception of the Classical Tradition (CUP, 2007), among numerous others (including two in progress OUP).