Star Of The Sea (Paperback) 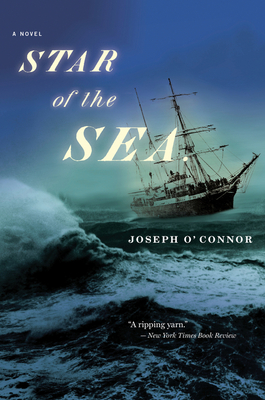 Star Of The Sea (Paperback)

In the bitter winter of 1847, from an Ireland torn by famine and injustice, the Star of the Sea sets sail for New York. On board are hundreds of refugees, some optimistic, many more desperate. Among them are a maid with a devastating secret, the bankrupt Lord Merridith, his wife and children, and a killer stalking the decks, hungry for the vengeance that will bring absolution.

This journey will see many lives end, others begin anew. Passionate loves are tenderly recalled, shirked responsibilities regretted too late, and profound relationships shockingly revealed. In this spellbinding tale of tragedy and mercy, love and healing, the farther the ship sails toward the Promised Land, the more her passengers seem moored to a past that will never let them go.

As urgently contemporary as it is historical, this exciting and compassionate novel builds with the pace of a thriller to a stunning conclusion.
JOSEPH O'CONNOR is the multi-award-winning author of several widely acclaimed novels, including Cowboys & Indians, Desperadoes, The Salesman, and Shadowplay. He has also written criticism, plays, and screenplays, and edited Yeats Is Dead!. He is Professor of Creative Writing at the University of Limerick, Ireland.

"Joseph O'Connor has a great eye for the absurd in common things, a great ear for the comic in ordinary speech. His writing is terrific."--Roddy Doyle


PRAISE FOR THE SALESMAN

"Powerful . . . freewheeling and supple, switching between the comic, the candid, and the profane."--The New York Times Book Review

"Gripping . . . O'Connor's dialogue is by turns bristling and bleak, tender and funny, and his characters are free of stereotypes."--The Wall Street Journal
—