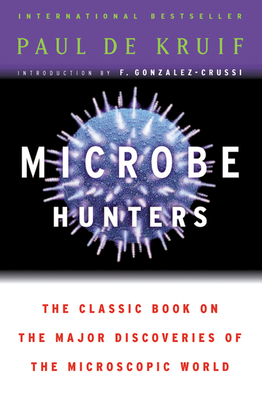 
Usually Ships in 1-5 Days
“It manages to delight, and frequently to entrance, old and new readers [and] continues to engage our hearts and minds today with an indescribably brand of affectionate sympathy.”—F. Gonzalez-Crussi, from the Introduction

An international bestseller, translated into eighteen languages, Paul de Kruif’s classic account of the first scientists to see and learn about the microscopic world continues to fascinate new readers. This is a timeless dramatization of the scientists, bacteriologists, doctors, and medical technicians who discovered the microbes and invented the vaccines to counter them. De Kruif writes about how seemingly simple but really fundamental discovers of science—for instance, how a microbe was first viewed in a clear drop of rain water, and when, for the first time, Louis Pasteur discovered that a simple vaccine could save a man from the ravages of rabies by attacking the microbes that cause it.

Paul de Kruif (1890-1971), a bacteriologist and pathologist, was a prolific author on the subject of medical science. He lived in Michigan and taught for many years at the University of Michigan in Ann Arbor.