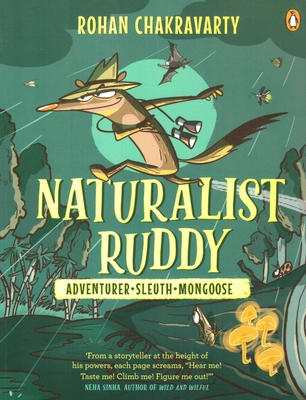 Are you 'Ruddy' for adventure?
In the forests of central India, where teak meets sal and plateaus meet hills, natural history meets detective fiction in an inquisitive Ruddy Mongoose's investigations. Join Naturalist Ruddy as he unearths some of nature's most fascinating mysteries in this one-of-a-kind comic book set across India's various natural habitats.

Rohan Chakravarty, notorious for rolling up into a ball like a pangolin to avoid meeting people, is a cartoonist, illustrator and the creator of Green Humour, a series of cartoons, comics and illustrations on wildlife and nature conservation. Cartoons from Green Humour appear periodically in newspaper columns, magazines and journals. Illustrations from Green Humour have been used for several projects and campaigns on wildlife awareness and conservation. Rohan is also the author of The Great Indian Nature Trail (WWF India) and Bird Business (BNHS), and has won awards by UNDP, Sanctuary Asia, WWF International, the Royal Bank of Scotland and Publishing Next for his work.