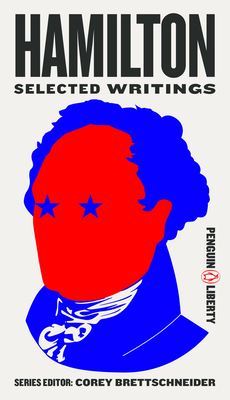 This is book number 3 in the Penguin Liberty series.

Essays, speeches, and letters on constitution ratification, pardoning powers, the Bank of the U.S., and foreign policy illuminate not only Hamilton’s legacy but his compelling engagement with Madison, Jefferson, and Adams, and his legendary conflict with Burr.

With the Penguin Liberty series by Penguin Classics, we look to the U.S. Constitution’s text and values, as well as to American history and some of the country’s most important thinkers, to discover the best explanations of our constitutional ideals of liberty. Through these curated anthologies of historical, political, and legal classic texts, Penguin Liberty offers everyday citizens the chance to hear the strongest defenses of these ideals, engage in constitutional interpretation, and gain new (or renewed) appreciation for the values that have long inspired the nation. Questions of liberty affect both our daily lives and our country’s values, from what we can say to whom we can marry, how society views us to how we determine our leaders. It is Americans’ great privilege that we live under a Constitution that both protects our liberty and allows us to debate what that liberty should mean.

Corey Brettschneider is a professor of political science at Brown University, where he teaches constitutional law and politics, as well as visiting professor of law at Fordham Law School. He has also been a visiting professor at Harvard Law School and the University of Chicago Law School. His recent writing has appeared in The New York Times, Politico, and The Washington Post. He is the author of The Oath and the Office: A Guide to the Constitution for Future Presidents. He is also the author of two books about constitutional law and civil liberties and numerous articles that appear in top academic journals and law reviews. His constitutional law casebook is widely used in classrooms throughout the United States. Brettschneider holds a PhD in politics from Princeton and a JD from Stanford Law School.

Alexander Hamilton was born in the British West Indian island of Nevis sometime between 1755 and 1757. He served as George Washington's secretary and aide-de-camp during the Revolutionary War. He was a New York delegate to the Constitutional Convention of 1787. He organized the writing of The Federalist essays, enlisting John Jay and James Madison in the effort. From 1789 to 1795 he served as America's first secretary of the Treasury. A growing animosity between Hamilton and longtime political rival Aaron Burr culminated in a duel in 1804. Hamilton was fatally shot, and died the day after their encounter.