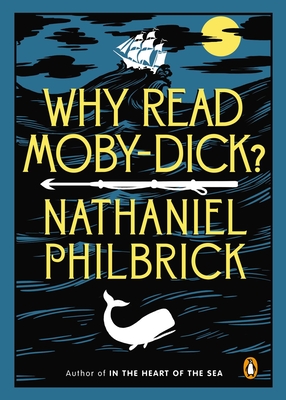 “I read this delightful homage to Melville's classic twice in succession and enjoyed it greatly both times. Philbrick, an unabashed and encouraging fan, has penned the perfect combination of biography, history, and literary criticism. His book is both fun and informative, and it is hard not to be swept up by his enthusiasm. It is likely to inspire many readers to tackle the classic, as it did me!”
— Christopher Rose, Andover Bookstore, Andover, MA

A “brilliant and provocative” (The New Yorker) celebration of Melville’s masterpiece—from the bestselling author of In the Heart of the Sea, Valiant Ambition, and In the Hurricane's Eye

One of the greatest American novels finds its perfect contemporary champion in Why Read Moby-Dick?, Nathaniel Philbrick’s enlightening and entertaining tour through Melville’s classic. As he did in his National Book Award–winning bestseller In the Heart of the Sea, Philbrick brings a sailor’s eye and an adventurer’s passion to unfolding the story behind an epic American journey. He skillfully navigates Melville’s world and illuminates the book’s humor and unforgettable characters—finding the thread that binds Ishmael and Ahab to our own time and, indeed, to all times. An ideal match between author and subject, Why Read Moby-Dick? will start conversations, inspire arguments, and make a powerful case that this classic tale waits to be discovered anew.

“A slim, easy-to-read argument on why you should definitely put [Moby-Dick] on your bucket list.”—History Wire

“This slender volume is packed with reasons why you might want to read the whaling classic.”
—Minneapolis Star-Tribune

“This slender, pleasant, sincere book by the maritime historian and naval enthusiast is more than a respectable tribute unencumbered by academic prose. Approaching Moby-Dick from outside the academy is refreshing, and Philbrick’s enthusiasm is contagious….So put me down for a reading of Moby-Dick in 2012, and count Philbrick’s book a success.”—The New Republic

“Philbrick does the literary world great service by bringing Moby-Dick back into popular attention and also by his skill in keeping American history fresh and alive.”—Aspen Daily News

“Sure to swell the readership of Melville’s masterpiece.”—Booklist (Starred review)

“In this cogent and passionate polemic for Melville’s masterpiece, Philbrick… combines a critical eye and a reader’s adoration to make a case for Moby-Dick… Less lit-crit and more readers’ guide, this tome will remind fans why they loved the book in the first place, and whet the appetites of trepid potential readers.”—Publishers Weekly

“A slim celebration of the elements of a literary masterpiece…Philbrick is an enthusiastic salesman for a sometimes daunting novel.”—Kirkus

“So you liked Philbrick’s In the Heart of the Sea, which re-created the wreck of the whaleship Essex, inspiration for Herman Melville’s Moby-Dick? Then you’ll love Philbrick’s new book… From a wonderful and knowing writer.”—Library Journalt