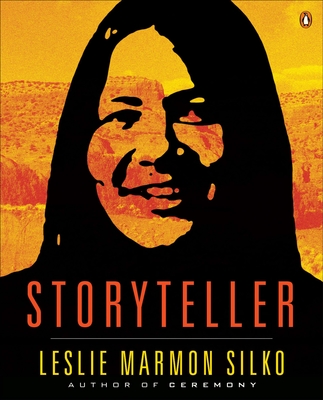 
Email or call for price
"A rich, many-faceted book." -- The New York Times

Leslie Marmon Silko's groundbreaking book Storyteller, first published in 1981, blends original short stories and poetry influenced by the traditional oral tales that she heard growing up on the Laguna Pueblo in New Mexico with autobiographical passages, folktales, family memories, and photographs. As she mixes traditional and Western literary genres, Silko examines themes of memory, alienation, power, and identity; communicates Native American notions regarding time, nature, and spirituality; and explores how stories and storytelling shape people and communities. Storyteller illustrates how one can frame collective cultural identity in contemporary literary forms, as well as illuminates the importance of myth, oral tradition, and ritual in Silko's own work. This edition includes a new introduction by Silko and previously unpublished photographs.
Leslie Marmon Silko was born in 1948 to a family whose ancestry includes Mexican, Laguna Indian, and European forebears. She has said that her writing has at its core “the attempt to identify what it is to be a half-breed or mixed-blood person.” As she grew up on the Laguna Pueblo Reservation, she learned the stories and culture of the Laguna people from her great-grandmother and other female relatives. After receiving her B. A. in English at the University of New Mexico, she enrolled in the University of New Mexico law school but completed only three semesters before deciding that writing and storytelling, not law, were the means by which she could best promote justice. She married John Silko in 1970. Prior to the writing of Ceremony, she published a series of short stories, including “The Man to Send Rain Clouds.” She also authored a volume of poetry, Laguna Woman: Poems, for which she received the Pushcart Prize for Poetry.

In 1973, Silko moved to Ketchikan, Alaska, where she wrote Ceremony. Initially conceived as a comic story abut a mother’s attempts to keep her son, a war veteran, away from alcohol, Ceremony gradually transformed into an intricate meditation on mental disturbance, despair, and the power of stories and traditional culture as the keys to self-awareness and, eventually, emotional healing. Having battled depression herself while composing her novel, Silko was later to call her book “a ceremony for staying sane.” Silko has followed the critical success of Ceremony with a series of other novels, including Storyteller, Almanac for the Dead, and Gardens in the Dunes. Nevertheless, it was the singular achievement of Ceremony that first secured her a place among the first rank of Native American novelists. Leslie Marmon Silko now lives on a ranch near Tucson, Arizona.

“A rich, many-faceted book . . . [Silko] has a sharp sense of the way in which the profound and the mundane often run together.” —N. Scott Momaday, The New York Times Book Review

“This multigeneric work lovingly maps the fertile storytelling ground from which [Silko’s] art evolves and to which it here returned—an offering to the oral tradition which nurtured it.” —Bernard A. Hirsch

“Takes us into old worlds of consciousness inside the present, and inside ourselves.” —Gloria Steinem