The Science of Harry Potter: How Magic Really Works (Paperback) 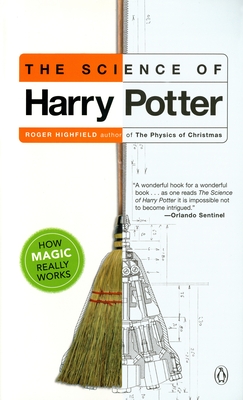 The Science of Harry Potter: How Magic Really Works (Paperback)


Usually Ships in 1-5 Days
Behind the magic of Harry Potter—a witty and illuminating look at the scientific principles, theories, and assumptions of the boy wizard's world, newly come to life again in Harry Potter and the Cursed Child and the upcoming film Fantastic Beasts: The Crimes of Grindelwald

Can Fluffy the three-headed dog be explained by advances in molecular biology? Could the discovery of cosmic "gravity-shielding effects" unlock the secret to the Nimbus 2000 broomstick's ability to fly? Is the griffin really none other than the dinosaur Protoceratops? Roger Highfield, author of the critically acclaimed The Physics of Christmas, explores the fascinating links between magic and science to reveal that much of what strikes us as supremely strange in the Potter books can actually be explained by the conjurings of the scientific mind. This is the perfect guide for parents who want to teach their children science through their favorite adventures as well as for the millions of adult fans of the series intrigued by its marvels and mysteries.

• An ALA Booklist Editors' Choice •
Roger Highfield was born in Wales, raised in north London and became the first person to bounce a neutron off a soap bubble. He was the science editor of The Daily Telegraph for two decades and the editor of New Scientist between 2008 and 2011. Today, he is the Director of External Affairs at the Science Museum Group. A regular broadcaster on the BBC and the winner of several journalism awards, Highfield is the author of The Physics of Christmas and coauthor of such highly acclaimed books as The Arrow of Time and The Private Lives of Albert Einstein.
“Animated by Highfield's enthusiasm for the extraordinary, The Science of Harry Potter is an enjoyably indirect survey of modern science.”
—The New York Times Book Review

“Far-ranging . . . Enlightens Harry Potter's magical realm, but also the magic taking place in labs and classrooms in our own world.”
—Science News

“He has interviewed the world's best Muggle scientists to identify the explanations behind everything from the Mirror of Erised to the Invisibility Cloak . . . A great introduction to a whole variety of issues.”
—Simon Singh, The Observer

“A wonderful hook for a wonderful book . . . as one reads The Science of Harry Potter it is impossible not to become intrigued.”
—Orlando Sentinel