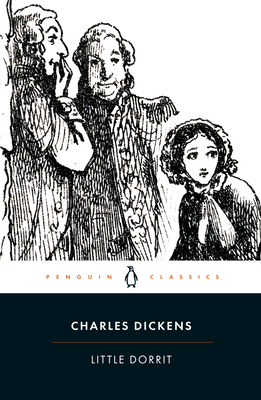 
Usually Ships in 1-5 Days
A novel of serendipity, of fortunes won and lost, and of the spectre of imprisonment that hangs over all aspects of Victorian society

When Arthur Clennam returns to England after many years abroad, he takes a kindly interest in Amy Dorrit, his mother's seamstress, and in the affairs of Amy's father, William Dorrit, a man of shabby grandeur, long imprisoned for debt in Marshalsea prison. As Arthur soon discovers, the dark shadow of the prison stretches far beyond its walls to affect the lives of many, from the kindly Mr Panks, the reluctant rent-collector of Bleeding Heart Yard, and the tipsily garrulous Flora Finching, to Merdle, an unscrupulous financier, and the bureaucratic Barnacles in the Circumlocution Office. A masterly evocation of the state and psychology of imprisonment, Little Dorrit is one of the supreme works of Dickens's maturity. Stephen Wall's introduction examines Dickens's transformation of childhood memories of his father's incarceration in the Marshalsea debtors' prison. This revised edition includes expanded notes, appendices and suggestion for further reading by Helen Small, a chronology of Dickens's life and works, and original illustrations.

For more than seventy years, Penguin has been the leading publisher of classic literature in the English-speaking world. With more than 1,700 titles, Penguin Classics represents a global bookshelf of the best works throughout history and across genres and disciplines. Readers trust the series to provide authoritative texts enhanced by introductions and notes by distinguished scholars and contemporary authors, as well as up-to-date translations by award-winning translators.
Charles Dickens was born on February 7, 1812, in Landport, Portsea, England. He died in Kent on June 9, 1870. The second of eight children of a family continually plagued by debt, the young Dickens came to know not only hunger and privation,but also the horror of the infamous debtors’ prison and the evils of child labor. A turn of fortune in the shape of a legacy brought release from the nightmare of prison and “slave” factories and afforded Dickens the opportunity of two years’ formal schooling at Wellington House Academy. He worked as an attorney’s clerk and newspaper reporter until his Sketches by Boz (1836) and The Pickwick Papers (1837) brought him the amazing and instant success that was to be his for the remainder of his life. In later years, the pressure of serial writing, editorial duties, lectures, and social commitments led to his separation from Catherine Hogarth after twenty-three years of marriage. It also hastened his death at the age of fifty-eight, when he was characteristically engaged in a multitude of work.

Stephen Wall is a Fellow of Keble College, Oxford.

Helen Small is a Fellow of Pembroke College, Oxford.

“One of the most significant works of the nineteenth century.”—Lionel Trilling