The Nature of Things (A Penguin Classics Hardcover) (Hardcover) 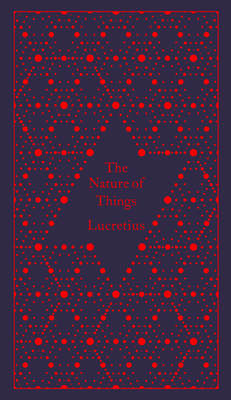 The Nature of Things (A Penguin Classics Hardcover) (Hardcover)

World-changing ideas meet eye-catching design: the best titles of the extraordinarily successful Great Ideas series are now packaged in Coralie Bickford-Smith’s distinctive,award-winning covers. Whether on a well-curated shelf or in your back pocket, these timeless works of philosophical, political, and psychological thought are absolute musthaves for book collectors as well as design enthusiasts.

The Nature of Things combines a scientific and philosophical treatise with some of the greatest poetry ever written. Lucretius demonstrates to humanity that in death there is nothing to fear, as the soul is mortal and the world and everything in it is governed by the mechanical laws of nature rather than by gods. By believing this, men can live with peace of mind and happiness. His far-ranging lyrical exploration of the universe continues with an examination of sensation, sex, cosmology, meteorology, and geology, all of these subjects made more attractive by the poetry with which he illustrates them. Translated by award-winning American classicist and poet A. E. Stallings, this volume also features an introduction by the esteemed Oxford classics scholar Richard Jenkyns.

For more than sixty-five years, Penguin has been the leading publisher of classic literature in the English-speaking world. With more than 1,500 titles, Penguin Classics represents a global bookshelf of the best works throughout history and across genres and disciplines. Readers trust the series to provide authoritative texts enhanced by introductions and notes by distinguished scholars and contemporary authors, as well as up-to-date translations by award-winning translators.
Titus LUCRETIUS Carus (who died c. 50 BC) was an Epicurean poet writing in the middle years of the first century BC. His six-book Latin hexameter poem De rerum natura survives virtually intact, although it is disputed whether he lived to put the finishing touches to it. As well as being a pioneering figure in the history of philosophical poetry, Lucretius has come to be our primary source of information on Epicurean physics, the official topic of his poem.

A. E. STALLINGS (editor/translator) was born in 1968. She grew up in Decatur, GA, and was educated at the University of Georgia and Oxford University in classics. Her poetry has appeared in The Best American Poetry (1994 and 2000) and has received numerous awards, including a Pushcart Prize (Pushcart Prize Anthology XXII), the 1997 Eunice Tietjens Prize from Poetry, and the third annual James Dickey Prize from Five Points.

RICHARD JENKYNS (introducer) is a professor of classics at the University of Oxford, a fellow of Lady Margaret Hall, and the author of a number of books, including Dignity and Decadence: Some Classical Aspects of Victorian Art and Architecture and The Victorians and Ancient Greece.
“Stallings’s verse translation . . . actually transforms [this] recondite poem about cosmology and human nature into an intellectual page-turner.” —Michael Dirda, The Washington Post