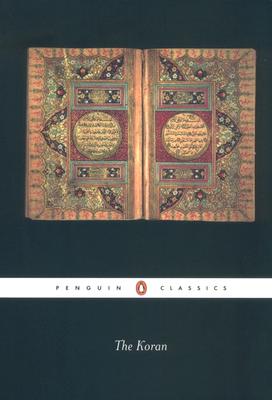 
Email or call for price
The Koran is universally accepted by Muslims to be the infallible Word of God as first revealed to the Prophet Muhammad by the Angel Gabriel nearly fourteen hundred years ago. Its 114 chapters, or surahs, recount the narratives central to Muslim belief, and together they form one of the world's most influential prophetic works and a literary masterpiece in its own right. But above all, the Koran provides the rules of conduct that remain fundamental to the Muslim faith today: prayer, fasting, pilgrimage to Mecca and absolute faith in God.
For more than seventy years, Penguin has been the leading publisher of classic literature in the English-speaking world. With more than 1,700titles, Penguin Classics represents a global bookshelf of the best works throughout history and across genres and disciplines. Readers trust theseries to provide authoritative texts enhanced by introductions and notes by distinguished scholars and contemporary authors, as well as up-to-datetranslations by award-winning translators.
N. J. Dawood was born in Baghdad, came to England as an Iraq State Scholar and graduated from London University. His translation of the" Tales from the Thousand and One Nights" was first published as Penguin No.1001 in 1954 and has since been printed in eighteen various editions. He is best known for his translation of the Koran, the first in contemporary English idiom, which was published as a Penguin Classic in 1956."