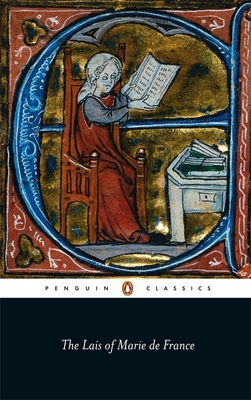 Marie de France (fl. late twelfth century) is the earliest known French woman poet and her lais—stories in verse based on Breton tales of chivalry and romance—are among the finest of the genre. Recounting the trials and tribulations of lovers, the lais inhabit a powerfully realized world where very real human protagonists act out their lives against fairy-tale elements of magical beings, potions and beasts. De France takes a subtle and complex view of courtly love, whether telling the story of the knight who betrays his fairy mistress or describing the noblewoman who embroiders her sad tale on the shroud for a nightingale killed by a jealous and suspicious husband.

For more than seventy years, Penguin has been the leading publisher of classic literature in the English-speaking world. With more than 1,700 titles, Penguin Classics represents a global bookshelf of the best works throughout history and across genres and disciplines. Readers trust the series to provide authoritative texts enhanced by introductions and notes by distinguished scholars and contemporary authors, as well as up-to-date translations by award-winning translators.
Glyn S. Burgess is currently Professor of French and Head of Department at the University of Liverpool. He has translated 'The Song of Roland' for Penguin Classics and he has published widely on 12th-century courtly literature. Keith Busby is George Lynn Cross Research Professor of French and Director of the Centre for Medieval and Renaissance Studies at the University of Oklahoma.