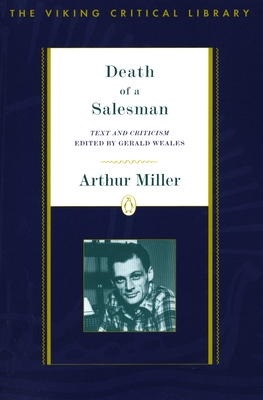 
Email or call for price
The Pulitzer Prize-winning tragedy of a salesman’s deferred American dream, presented here with enlightening commentary and criticism

Willy Loman, the protagonist of Death of a Salesman, has spent his life following the American way, living out his belief in salesmanship as a way to reinvent himself. But somehow the riches and respect he covets have eluded him. At age 63, he searches for the moment his life took a wrong turn, the moment of betrayal that undermined his relationship with his wife and destroyed his relationship with Biff, the son in whom he invested his faith. Willy lives in a fragile world of elaborate excuses and daydreams, conflating past and present in a desperate attempt to make sense of himself and of a world that once promised so much.

Since it was first performed in 1949, Arthur Miller's Pulitzer Prize-winning drama about the tragic shortcomings of an American dreamer has been recognized as a milestone of the theater. This Viking Critical Library edition of Death of a Salesman contains the complete text of the play, typescript facsimiles, and extensive critical and contextual material including:
Arthur Miller was born in New York City in 1915 and studied at the University of Michigan. His plays include All My Sons (1947), Death of a Salesman (1949), The Crucible (1953), A View from the Bridge and A Memory of Two Mondays (1955), After the Fall (1963), Incident at Vichy (1964), The Price (1968), The Creation of the World and Other Business (1972) and The American Clock. He has also written two novels, Focus (1945), and The Misfits, which was filmed in 1960, and the text for In Russia (1969), Chinese Encounters (1979), and In the Country (1977), three books of photographs by his wife, Inge Morath. More recent works include a memoir, Timebends (1987), and the plays The Ride Down Mt. Morgan (1991), The Last Yankee (1993), Broken Glass (1993), which won the Olivier Award for Best Play of the London Season, and Mr. Peter's Connections (1998). His latest book is On Politics and the Art of Acting. Miller was granted with the 2001 Medal for Distinguished Contribution to American Letters. He has twice won the New York Drama Critics Circle Award, and in 1949 he was awarded the Pulitzer Prize.

"By common consent, this is one of the finest dramas in the whole range of the American theater." —Brooks Atkinson, The New York Times

"So simple, central, and terrible that the run of playwrights would neither care nor dare to attempt it." —Time