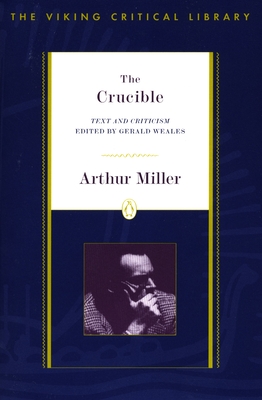 
Email or call for price
A haunting examination of groupthink and mass hysteria in a rural community, presented here with enlightening criticism and commentary

"I believe that the reader will discover here the essential nature of one of the strangest and most awful chapters in human history," Arthur Miller wrote in an introduction to The Crucible, his classic play about the witch-hunts and trials in seventeenth-century Salem, Massachusetts. Based on historical people and real events, Miller's drama is a searing portrait of a community engulfed by hysteria.

In the rigid theocracy of Salem, rumors that women are practicing witchcraft galvanize the town's most basic fears and suspicions; and when a young girl accuses Elizabeth Proctor of being a witch, self-righteous church leaders and townspeople insist that Elizabeth be brought to trial. The ruthlessness of the prosecutors and the eagerness of neighbor to testify against neighbor brilliantly illuminate the destructive power of socially sanctioned violence.

Written in 1953, The Crucible is a mirror Miller uses to reflect the anti-communist hysteria inspired by Senator Joseph McCarthy's "witch-hunts" in the United States. Within the text itself, Miller contemplates the parallels, writing: "Political opposition...is given an inhumane overlay, which then justifies the abrogation of all normally applied customs of civilized behavior. A political policy is equated with moral right, and opposition to it with diabolical malevolence."
This Viking Critical Library edition of Arthur Miller's dramatic recreation of the Salem witch trials contains the complete text of The Crucible as well as extensive critical and contextual material about the play and the playwright, including:
Arthur Miller was born in New York City in 1915 and studied at the University of Michigan. His plays include All My Sons (1947), Death of a Salesman (1949), The Crucible (1953), A View from the Bridge and A Memory of Two Mondays (1955), After the Fall (1963), Incident at Vichy (1964), The Price (1968), The Creation of the World and Other Business (1972) and The American Clock. He has also written two novels, Focus (1945), and The Misfits, which was filmed in 1960, and the text for In Russia (1969), Chinese Encounters (1979), and In the Country (1977), three books of photographs by his wife, Inge Morath. More recent works include a memoir, Timebends (1987), and the plays The Ride Down Mt. Morgan (1991), The Last Yankee (1993), Broken Glass (1993), which won the Olivier Award for Best Play of the London Season, and Mr. Peter's Connections (1998). His latest book is On Politics and the Art of Acting. Miller was granted with the 2001 Medal for Distinguished Contribution to American Letters. He has twice won the New York Drama Critics Circle Award, and in 1949 he was awarded the Pulitzer Prize.