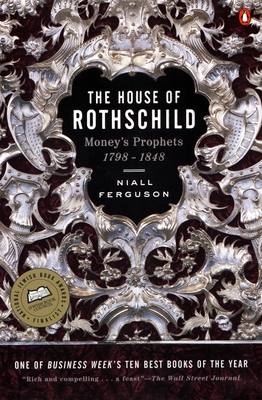 This is book number 1 in the The House of Rothschild series.

In his rich and nuanced portrait of the remarkable, elusive Rothschild family, Oxford scholar and bestselling author Niall Ferguson uncovers the secrets behind the family's phenomenal economic success. He reveals for the first time the details of the family's vast political network, which gave it access to and influence over many of the greatest statesmen of the age. And he tells a family saga, tracing the importance of unity and the profound role of Judaism in the lives of a dynasty that rose from the confines of the Frankfurt ghetto and later used its influence to assist oppressed Jews throughout Europe. A definitive work of impeccable scholarship with a thoroughly engaging narrative, The House of Rothschild is a biography of the rarest kind, in which mysterious and fascinating historical figures finally spring to life.
Niall Ferguson is one of the world's most renowned historians. He is the author of Paper and Iron, The House of Rothschild, The Pity of War, The Cash Nexus, Empire, Colossus, The War of the World, The Ascent of Money, High Financier, Civilization, The Great Degeneration, Kissinger, 1923-1968: The Idealist, and The Square and the Tower. He is Senior Fellow at the Hoover Institution, Stanford University, and a Visiting Professor at Tsinghua University, Beijing. His many awards include the Benjamin Franklin Prize for Public Service (2010), the Hayek Prize for Lifetime Achievement (2012) and the Ludwig Erhard Prize for Economic Journalism (2013).

"A stupendous achievement, a triumph of historical research and imagination."—Robert Skidelsky, The New York Review of Books

"Superb ... An impressive ... account of the Rothschilds and their role in history."—Boston Globe