The Miracle of Mind Dynamics: Use Your Subconscious Mind to Obtain Complete Control Over Your Destiny (Paperback) 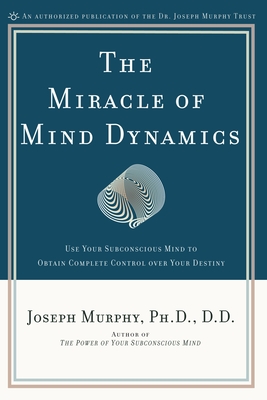 The Miracle of Mind Dynamics: Use Your Subconscious Mind to Obtain Complete Control Over Your Destiny (Paperback)


Email or call for price
Here, at last, is a simple yet powerful way to place your subconscious mind in direct contact with the Universal Mind - the all-seeing, all-knowing, all-powerful collective subconscious of the human race! Through the centuries this Mind has been called many things: God, Nature, the Infinite Intelligence and many other names. Now a brilliant minister-scientist offers positive proof that this power exists - and shows you how you can tap it by means of an amazing, step-by-step, 60 SECOND ACTION PLAN.

This simple yet powerful method can place the subconscious mind in direct contact with the Universal Mind--the all-seeing, all-knowing collective subconscious of the human race. Dr. Murphy offers positive proof this power exists.
A native of Ireland, Joseph Murphy (1898 — 1981) was a prolific and widely admired New Thought minister and writer, best known for his motivational classic, The Power of Your Subconscious Mind, an international bestseller since it first blazed onto the self-help scene. His pamphlet How to Attract Money first appeared in 1955, and likewise entered many editions. Murphy wrote widely on the auto-suggestive and metaphysical faculties of the human mind and is considered one of the pioneering voices of affirmative-thinking philosophy.