The Librarian of Burned Books: A Novel (Hardcover) 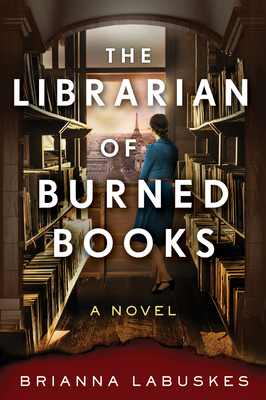 The Librarian of Burned Books: A Novel (Hardcover)

For fans of The Rose Code and The Paris Library, The Librarian of Burned Books is a captivating WWII-era novel about the intertwined fates of three women who believe in the power of books to triumph over the very darkest moments of war.

Berlin 1933. Following the success of her debut novel, American writer Althea James receives an invitation from Joseph Goebbels himself to participate in a culture exchange program in Germany. For a girl from a small town in Maine, 1933 Berlin seems to be sparklingly cosmopolitan, blossoming in the midst of a great change with the charismatic new chancellor at the helm. Then Althea meets a beautiful woman who promises to show her the real Berlin, and soon she’s drawn into a group of resisters who make her question everything she knows about her hosts—and herself.

Paris 1936. She may have escaped Berlin for Paris, but Hannah Brecht discovers the City of Light is no refuge from the anti-Semitism and Nazi sympathizers she thought she left behind. Heartbroken and tormented by the role she played in the betrayal that destroyed her family, Hannah throws herself into her work at the German Library of Burned Books. Through the quiet power of books, she believes she can help counter the tide of fascism she sees rising across Europe and atone for her mistakes. But when a dear friend decides actions will speak louder than words, Hannah must decide what stories she is willing to live—or die—for.

New York 1944. Since her husband Edward was killed fighting the Nazis, Vivian Childs has been waging her own war: preventing a powerful senator’s attempts to censor the Armed Service Editions, portable paperbacks that are shipped by the millions to soldiers overseas. Viv knows just how much they mean to the men through the letters she receives—including the last one she got from Edward. She also knows the only way to win this battle is to counter the senator’s propaganda with a story of her own—at the heart of which lies the reclusive and mysterious woman tending the American Library of Nazi-Banned Books in Brooklyn.

As Viv unknowingly brings her censorship fight crashing into the secrets of the recent past, the fates of these three women will converge, changing all of them forever.

Inspired by the true story of the Council of Books in Wartime—the WWII organization founded by booksellers, publishers, librarians, and authors to use books as “weapons in the war of ideas”—The Librarian of Burned Books is an unforgettable historical novel, a haunting love story, and a testament to the beauty, power, and goodness of the written word.

Brianna Labuskes is the Washington Post bestselling author of five thrillers. For the first decade of her career, Brianna worked as a journalist for national news organizations covering politics and policy.

In her excellent debut novel, Brianna Labuskes writes lovingly of the power of books, libraries, and friendship to sustain us in difficult times, while also offering a stark, unmistakably relevant warning about the dangers of censorship. Fans of historical fiction featuring courageous women will savor The Librarian of Burned Books. — Jennifer Chiaverini, author of Resistance Women

Each of the main characters is clearly drawn and sympathetic, the plot kept me awake turning pages far into the night, and the well-earned resolution was poignant and emotional. The depiction of lesbian romance felt authentic and respectful. This novel is a timely reminder that the burning or banning of books is the first step in an escalating war on freedom of thought and expression that can have devastating consequences. The women in this novel develop the strength to overcome fear, doubt, and trepidation to resist censorship and hate each in her own way.... An entertaining and riveting read. — Kim van Alkemade, New York Times bestselling author of Orphan #8 and Bachelor Girl

Inspired by the fascinating real story of a little-known World War II-era group of librarians, authors, publishers, and booksellers who united to fight fascism with literature, THE LIBRARIAN OF BURNED BOOKS is a thoroughly engrossing page-turner that proves how powerful words and ideas can be, no matter the era. Filled with intrigue and secrets, this timely novel follows three women from Berlin to Paris to New York City to right past wrongs using books as their weapon of choice.
— Elise Hooper, author of Angels of the Pacific

I've always believed that the most memorable historical novels are those that, by shining a light on the past, show us a better way forward into the future. Brianna Labuskes's masterful debut is one such novel. Alternating between time periods, and armed with three richly drawn characters, Labuskes unfurls a story of censorship and fear in 1930s Germany and of hope and grit in 1944 New York. A propulsive, immersive, expertly crafted debut that reminds us of the perils of censorship, the power of books, and the duty we all have to stand up for the freedoms we hold dear. — Kristin Harmel, New York Times bestselling author of The Book of Lost Names

As Labuskes weaves perspectives together, she not only highlights the pain of censorship, suppression, and dehumanization but also issues a stark reminder that history repeats itself. At the same time, she plants seeds of hope in her characters’ refusal to let the stories that should bring us together be silenced. — Booklist (starred review)